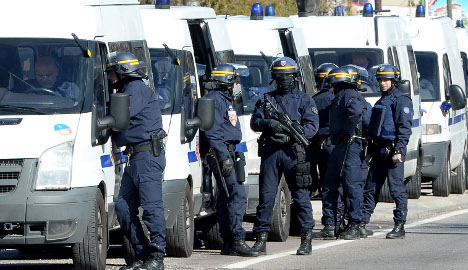 Armed police ring the Castellane housing estate in Marseille after shots were fired at police on Monday. Photo: Boris Horvat/AFP

A police operation was under way Monday in an estate in the French city of Marseille where residents said "Kalashnikov shots" were fired "in the air".

The AFP news agency reported that five to ten men were seen firing into the air at around 10.30am. Residents immediately raised the alarm and armed police were sent to the scene.

When police arrived shots were then fired at their vehicles, one of which contained police chief Pierre-Marie Bourniquel, who went to the scene to manage the operation.

He was forced to take cover in his car, with the bullets flying nearby, Le Figaro claimed.

"We were fired at when we arrived at the scene," Pierre-Marie Bourniquel told AFP, who added the three vehicles were "clearly identified as police cars." No officer was injured.

Special forces entered the La Castellane estate, which is known for being a drug trafficking hotspot. The area has been sealed off as police look for the gunmen. A police helicopter was also sent to help the search for the gunmen.

A nursery school has been evacuated and thousands of people in the area have been told to stay indoors.

It was not immediately clear what sparked the shots, but Marseille has for years had a reputation as a hotbed of crime that has prompted some politicians to call for the army to be sent in to police the city's toughest neighbourhoods.

PM Manuel Valls is due in Marseille later, ironically, to give a talk about falling crime rates in a city, which has been blighted by gun crime in recent years.

Police claim many murders in the city are linked to turf wars between multiple rival gangs battling for control of the drugs trade in the city's poorest neighbourhoods.

The violence, they say, is aggravated by the easy availability of high-calibre weapons, with Kalashnikov automatic rifles being the murder instrument of choice.

In 2013, Valls, who was then interior minister, had said that entire neighbourhoods were "abandoned to the dealers."

Local politicians have blasted the government for ignoring the problem and refusing to hand over the necessary resources.

Marseille senator Samia Ghali tweeted: "Castellane estate in a state of siege. My worse nightmare. Weapons of war… We can no longer turn our heads. #Marseille."

The city's reputation as the gun crime capital of France has naturally had a negative of its image. In an interview with The Local in 2013, tourist chief Maxim Tissot, insisted the city was safe and that tourists had nothing to fear.

“There is no more of a problem with security in Marseille than in any other big city,” he said. “We are a big city, with one million inhabitants. The violence is not really an issue for tourists. Since the beginning of the year we have increased visitor numbers by 30 percent.”