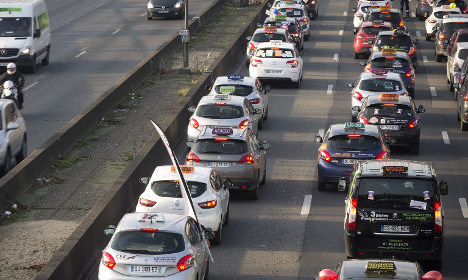 Driving school cars queue on the Parisian ring road. Photo: AFP
The traffic in parts of Paris was at a standstill on Monday morning as driving school instructors and union members took to the streets to protest government reforms.
Police are advising motorists stay off the roads around the capital with a "go-slow" protest send to cause major disruption. Similar protests are being held in 13 other cities across France.

They are angry at the so-called "Macron law" – a package of reforms introduced by Economy Minister Emmanuel Macron which, among other things, includes changes to the how a driving licence is obtained.
One union chief said the reform was a "declaration of war" against the profession of a driving instructor.
Essentially the "Macron law" seeks to reduce the time and cost that it takes to get a driver's license.
Instructors are angry that the reform plans to do away with the rule that applicants must undertake a minimum 20 hours of lessons before taking the test.
"This would send the wrong signal to young drivers," said Frédéric Martinez,boss of driving school ECF.
They are also against the fact that outside agents, notably from La Poste, will be allowed to carry out the practical exams in a bid to cut the time applicants have to wait for to take their practical test.
The government hopes the move will help cut the waiting time for a test from the current average 98 days (five months in Paris)  to 45 days, within two years.
The instructors planned to hold similar protests in 15 other cities around France, reported French newspaper Le Parisien.
Motorists can also expect delays on Monday with taxi drivers and motorcyclists also set to hold demonstrations.
Paris saw a 2,000 strong motorbike procession zooming through the streets on Sunday as bikers protested against the proposed measures to reduce Paris's ever worrying pollution levels by limiting access to the capital for those on motorbikes.
Angry bikers called for a similar protest on Monday at Châtelet in the heart of Paris.
Here's some images from Monday morning's protest.