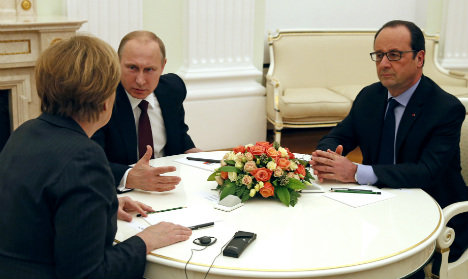 "Work is now being done on a document… on the implementation of the Minsk agreement," the official said, confirming what Putin's spokesman had said earlier.

French President Francois Hollande and German Chancellor Angela Merkel arrived in Moscow on Friday in an attempt to "seek a deal" to end the Ukraine crisis.

The French president arrived in Moscow minutes after Merkel's plane touched down at Vnukovo airport and they headed straight to see Russian President Vladimir Putin.
Merkel and Hollande's mission is widely seen as a desperate attempt to prevent the 10-month conflict in eastern Ukraine from spiralling out of control as Washington is considering whether to send lethal weapons to Kiev.