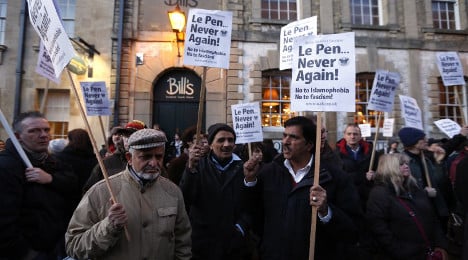 Protesters held up placards with slogans such as "Le Pen never again" and "Oxford Union is offering a platform for fascists".

Over 500 people had signed a petition to the Oxford Union, a debating society for students attending Oxford University in southern England, demanding it rescind the invitation to the leader of France's National Front.

"I'm here today because Marine Le Pen is racist and we need to tell her her racism is not welcome here in Oxford," said protester Sarah Bates, 25, a student and member of Oxford Unite Against Fascism, one of the groups that organised the protest.

But others waiting to attend said it was important that Le Pen be heard.

"Le Pen is such an important political player in France, it's really important that we have the opportunity to come and hear her speak and really understand what her views are and where she's come from," said student William Rees, 19, as he waited to attend the debate.

Le Pen took over the reins of the far-right party from her father Jean-Marie Le Pen in 2011 and is widely expected to make a bid for the French presidency in 2017.

"Since 1823, the year of the foundation of your society, the Oxford Union has been a place of debate linked to freedom of expression," she wrote.

glorious! RT @chrisjsfountain Chants of "Oxford Union, Shame on you" ringing out at #LePen protest. pic.twitter.com/5vZ5Uh4uQD

Referring to three days of terror attacks in Paris in January, Le Pen stressed the need for border controls and a large reduction in immigration.

Le Pen has proved herself a wily political operator who softened the xenophobic extremist image the party had held under her father and broadened its appeal.

The party made gains in both local and European elections last year.

Past speakers at the Oxford Union include former British prime ministers Winston Churchill and Tony Blair, as well as US presidents Richard Nixon and Ronald Reagan.