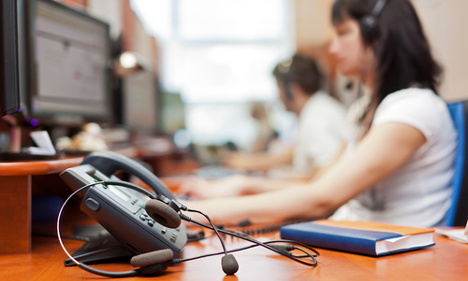 January saw hundreds of calls to the anti-jihadist hotline. Photo: Shutterstock
The hotline received around 300 calls deemed to be of a "significant" nature in January, French radio RTL reported.
The site reported that most of these callers were parents worried their sons or daughters may be in the process of being radicalized or were preparing to leave for Syria and Iraq.
Interior Minister Bernard Cazeneuve said that the unprecedented wave could be put down to an increased "awareness" from the French public following the Paris terror attacks, which left 17 people dead.
The hotline was opened in April last year and has received 1,163 calls in total, the majority of which come from men. Of these calls, 164 were from people who had actually joined fighting in Iraq or Syria, RTL reported.
France's Prime Minister Manuel Valls announced last month that around 1,400 people living in France have either joined the jihadist cause in Syria and Iraq or are planning to.
Since the terror attacks, France has introduced a raft of new measures to combat jihadism. On Thursday, the interior ministry announced that a new law that allows authorities to close down websites glorifying terrorism has come into force. Controversially the law doesn't require authorities to have a court order to shut down a website.
The move has been met with opposition by groups backing internet freedom.
The group La Quadrature du Net slammed the move for being quasi-illegal and ineffective.
"With this decree establishing administrative censorship of Internet, France once again circumvents the judicial power, betraying the separation of powers in limiting what is the first freedom of all in a democracy: freedom of speech. Website blocking is ineffective since it is easily circumvented," said Felix Tréguer, founding member of La Quadrature du Net.
"It is also disproportionate, because of the risk of over-blocking perfectly lawful content, especially with the blocking technique retained by the Government.
"Blocking only gives the illusion that the State is acting for our safety, while it merely goes one step further in undermining fundamental rights online. We must now bring this decree before the French Council of State to get it overturned," he added.
As part of its counter-terrorist campaign “Stop Jihadism”, the French government has released a nine-point check list to help people spot someone on the path to jihad, and also a series of videos warning youths how the allure of Syria and Iraq is very different from the reality.
French media also revealed on Wednesday that the national army has been using fake identities to secretly fight jihadism online, through the infiltration of social networks like Facebook and Twitter.
Cazeneuve said this week that there were currently 161 legal proceedings in France against 547 people suspected of jihadist activity.
Read also: France launches shock video to 'stop jihadists'