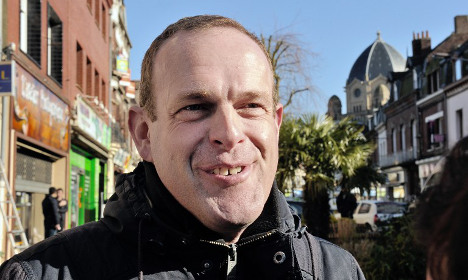 Steeve Briois, far-right Front National (FN) party mayor of Henin-Beaumont. Photo: AFP
In the Hénin-Beaumont commune in the north of France, the National Front Mayor Steeve Briois decided to take action against the rising tide of aggressive burglars.
To keep them away from a residential area, he lobbied for a thick stone wall to be placed directly across a street to keep unwanted visitors away.
The problem? The wall is only one metre high.

After the structure came under fire from the French press on Thursday, the mayor took to his blog to defend the wall, stating that "around 90 percent" of the 200 people in the area had voted in favour of the construction.
"The decision was made after two burglars stabbed a man in his home – including once in the head," he explained. "200 residents then met up to to find an urgent solution to this intolerable situation."
"The safety of my fellow citizens is a priority (…) and I won't give up," he concluded
Despite the fact that the "impenetrable wall" looks rather conquerable indeed, other locals are unimpressed for other reasons.
One woman, who voted against the wall, told French newspaper Le Figaro that she didn't think building a wall in the street was "a real solution".
"Today, my husband had to take an 8-kilometre detour just to get to work," she said.
French news website La Voix du Nord reported that a new petition to take down the wall is now doing the rounds in the area.