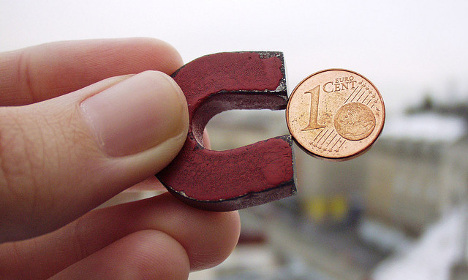 Is the weak euro drawing people to France? Photo: Mario's Planet/Flickr
As of Thursday, one euro was worth £0.75 and $1.14 and one British pound was worth €1.33 – one of the best exchange rates in years, if you're coming from abroad that is.
While it costs a lot more to go home that it did a year or two ago, there are many tourists and expats in France who are rejoicing at the continued weakness of the euro.
Here's a look at three areas where a weak euro could have a marked impact on foreigners in France.
The property market:
The weak euro has naturally meant good news for those who have always dreamed of buying a property in France.
A France-based estate agent tells The Local there's some amazing deals out there now for anyone willing to take the risk and who has a bit of money to spare.
"The prices are amazing right now, the exchange rate is fabulous – especially for people from England," Mary Hawkins, PR manager at French real estate company Leggett Immobilier, tells The Local.
While she says it's too early to notice a swing, she predicts a healthy change in the upcoming half term and Easter breaks.
"That will be the telling time. More people will be on holidays and that's when they book tickets. If they're serious enough, they'll buy when they're here. And for what you can get right now for half a million pounds it's the best it's been for six or seven years."
She added that while many people from the UK had been stuck buying smaller properties over the past few years, she says now is the time to strike.
"People can get a lot more for their money if they act now," she says.

Pensions and savings:
Pensioner Brian Cave has lived in France for the past 17 years and makes it clear the weakening euro is "a damn good thing".
"We're having our kitchen refurbished," he tells The Local, adding that it's not just the big things that he and other expats are noticing.
"Six or so years ago, people simply stopped eating out – you just couldn't afford it. Now you can go out for a decent upper class meal, as it were," he continues. "Up until recently, you just couldn't get away with doing that.
"One hundred percent of my income is from Britain, and the increase in the value of the pound is a damn good thing.
"For those of us who are determined to live here – like me – then the value of the pound going up is a very, very worthwhile thing."
But Victoria Lewis, financial advisor from the Paris office of the independent Spectrum IFA Group, says some expats in France will be hit hard – especially those with overheads in the UK, or those paying back their UK mortgages using euros.
"We haven't seen this rate between sterling and euro since 2008/2009," she tells The Local.
"And this is very bad news for anyone who is leaving France at the moment, imagine someone who has sold their property up and plans to move back with large amounts of money. It's a real worry for them."
On the other hand, people with money in the UK or US should act quickly, she explains.
"We're encouraging people with money back home to convert it now. We're also advising them to opt for an FCA-regulated foreign exchange office rather than their bank. We recommend customers to go in and talk to them, you can often get a much better exchange rate than at your local bank as these offices are far more competitive.
"Shopping around can make a difference in exchange rates of up to 20 percent. Remember, banks may take a commission of up to 30 percent, whereas the rates can be a whole lot lower at an exchange office."

Photo: Images Money/Flickr
Tourism:
The ever-weakening euro has already seen tourists getting busy booking holidays to Italy and Spain this year but in France experts say any boost may be offset by fears over terrorist attacks.
Francis Ho, the owner of French tour operators France's Impressions Voyages, says that it's hard to pinpoint whether the weakened euro has affected tourism yet.
"But I have had three inquiries this morning alone, perhaps it's a sign," he said. "But really, I don't think we will know for sure until about April how much of an effect the weaker euro will have. It's still early days yet."
He says that it's not currency that will affect tourism in France this year, anyway.
"The biggest change I have seen recently is due to terrorism fears. People are telling us that they are afraid of using public transport and that they want to travel privately.
"If there was another attack anytime soon then things will really change for the worse when it comes to tourism – it would make far more of a difference than the strength of a currency."
Paul Rickard, research consultant at the European Tourism Association, expects the falling euro will see a boost in tourism.

"A weaker euro will likely have a positive impact on tourism as the general perception over time will be one of increased value for those from outside the eurozone," he told our colleagues at The Local Spain.

Weaker currency or not, France is still the most popular holiday destination in the world, according to a report last week from the United Nations World Tourism Organization (UNWTO).

It beat out the likes of the US, Spain, and China in the ranking, earning $56.1 billion from tourism in 2013 alone.

Six reasons why France is the world's top tourist destination