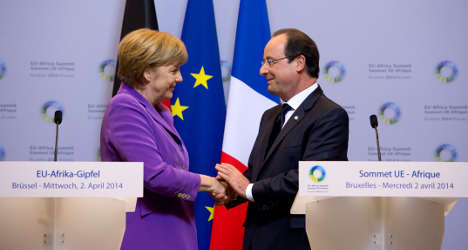 Hollande and Merkel will head to Kiew and Moscow with a new peace initiative. Photo: AFP

Hollande announced to the media on Thursday that he and along with Merkel will fly to Ukraine and then Moscow to present a new plan to end the conflict in the east of the country.

"We will propose a new solution to the conflict based on the territorial integrity of Ukraine. We will discuss it with President (Petro) Poroshenko today and on Friday in Moscow with the Russian president," Hollande said at his biannual press conference.

Other than arming Ukraine "there is another option, it is not certain it will succeed but if we don't try we will never know. That is the option of diplomacy, negotiation (but) that cannot go on indefinitely," Hollande told journalists.

"It cannot be the said that we didn't do everything to preserve peace," Hollande said. "Peace is threatened on Europe's borders. Ukraine is at war."

He continued: "We think that war is for others, it's not for our generation, it's for our grand parents. But a few hours away from France by plane, there are men and women who dying every day.

"There are heavy weapons, artillery fire, there are hostilities," he said.

Hollande noted that a volley of sanctions against Russia had failed to "stop hostilities" and said he and Merkel had come up with a new initiative in a bid to stem fighting between Kiev and separatist rebels in eastern Ukraine.

Moscow denies allegations by Ukraine and its Western allies that it is sending thousands of regular army troops and weapons to support the rebels.

The fighting has claimed more than 5,358 lives since April, including some 220 in just the past three weeks, according to the United Nations.