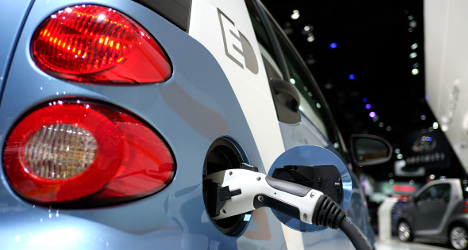 A Smart electric car. Photo: Jewel Sawad/AFP
Car owners willing to change their diesel vehicle for an electric one will benefit from the "super bonus" from April onwards.
"I think we need to end the violations on public health," Royal told French TV channel BFMTV.
"A lot of of respiratory infections are caused by car pollution," she said, adding that there was enough new technology available to make serious change.
"We have to encourage drivers to buy clean cars," she concluded.
But not every electric car owner in the country will be able to benefit from the bonus. They must live in one of France's 23 'PPA zones' – which mark the country's most polluted areas – and they have to prove that they have taken their diesel cars that are 13 years old and older to the scrap heap.
Owners of thermal engine cars (running with gas and diesel) will have their current bonuses scrapped in favour of the new "super bonus", while current penalties will remain for owners of the most polluting cars producing C02, fines which range from €150 to €3,700.
For people driving hybrid vehicles (those running with gas and electricity) that do not recharge their batteries, the bonus will decrease from €2,000 to €1,500.
The government also plans to create a €2,500 bonus for owners of "plug-in cars", also known as rechargeable hybrid cars.
Royal added that seven million electrical charge ports will be installed nationwide and will become compulsory in "private and public parking areas, train stations, supermarkets, and airports".
The "super bonus" is part of a large plan that the government is launching this year.