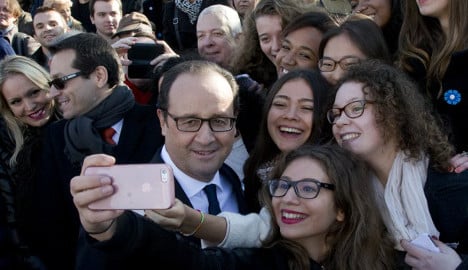 Following the attacks questions have been asked about French identity and values and why the young men who killed 17 people turned against their own people.

Hollande has talked of the need to implant the values of the Republic, notably secularism, in its young people from an early age in order to avoid the creation of divisions in French society.

But some politicians notably those on the right have even called for the reintroduction of compulsory national or military service.

The President announced on Thursday the creation of a new “civic contract” which he hopes will help instill a felling of national pride and togetherness.

At his biannual press conference on Thursday Hollande told journalists: “Civic engagement is our responsibility. The French have shown their love for the Republic is intact and that they have a deep desire to be useful and serve the common good.” “I propose a new civic contract, along with the creation of a universal service for young people, the creation of a citizen reserve for all French people, all those who want to participate in the collective impetus to give their best and to improve participatory democracy,” Hollande said.

The current civic service in France boasts just 35,000 young workers, who are paid €573 a month. The problem is each participant on the scheme costs the state €800 a month.

"At the moment, there are four times more demands than available places on community services projects," he noted.

Last year, only 35,000 young people won a place on a scheme but 80 percent of applicants were turned away for lack of places.

In a recent interview with AFP, the head of the French Agency for Civic Service, Francois Chereque, said there was no shortage of jobs that could occupy young people, such as teaching children struggling at school, helping the growing numbers of elderly.

The president however said there would be no obligatory civic service but that it would be open for all young people "who want to offer a service" and that they will be able to do so from June 1st.

“If we went towards an obligatory civic service, then we would have to consult the public,” he told journalists.

The president also stressed the importance of the French principle of secularism, which he said was "non-negotiable".

"Everything starts with secularism, it is not a formula. It is non-negotiable.

"It is freedom of conscience and therefore freedom of religion. Secularism is a guarantee for France. Secularism must be learned and it will be done in school throughout compulsory education," he said.

Hollande also announced new measures surrounding the education system. Along with reorganizing and improving French language teaching, he also wants to fight school drop-outs and announced that teachers will be better "trained and prepared to succeed in their job."