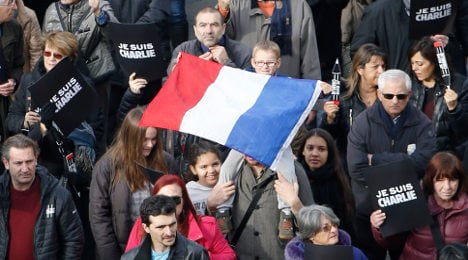 French people are still searching for answers one month after the Paris terror attacks. Photo: AFP

Maxence Hamard never used to spend much time thinking about French society, but all that changed dramatically one month ago when Islamist attackers wrought terror in Paris over three, long days.

"Now, I change my mind all the time on all sorts of issues," the 23-year-old student says in a cafe near the site of the first attack on satirical magazine Charlie Hebdo, where flowers, cartoons and messages form a makeshift shrine.

He's not alone. Stunned, the country has done much soul-searching as to how three Frenchmen could kill 17 of their countrymen and women.

At the foot of a barricade near the white building where the Kouachi brothers burst into Charlie Hebdo's offices on January 7th and shot 11 people, including famous cartoonists, a red pinwheel flutters in the breeze, the words "la vida" ("life") stuck in the centre.

Not far away, a mound of flowers marks the spot where one of the brothers killed Ahmed Merabet, a policeman who tried to stop them.

"I am Arab, I am Muslim, I am a victim, I am Charlie," reads one sign pinned onto a fence that overlooks the pavement where he fell, a reminder that Islam should not be blamed for the jihadist killings.

But in the 25 days after the attack, 147 anti-Muslim incidents had been reported to authorities in France, not including Paris and its surrounding region — more than for the whole of 2014.

"Our state of mind is one of fear, and also of anger," says Fateh Kimouche, the creator of Al-Kanz, an influential blog for Muslims.

"I'm a Frenchie but I feel like I am in hostile territory," he adds.

Back at the Charlie Hebdo offices, where armed policemen keep guard — part of some 15,000 security forces deployed around sensitive sites nationwide — Nathalie Mehessen, from the eastern Alsace region, has come to pay her respects.

She runs a creche attended by children from different origins and religions, and feels kids have to be taught to live together in harmony from an early age.

The government has announced measures to rally children who feel excluded on religious and ethnic grounds around the French values of "liberty, equality, fraternity" and secularism.

But Prune Hebert, a teacher at Camille Jenatzy high school in Paris, feels the government should focus more on social inequalities.

Many of her students are born in France to immigrant families, and still cannot read well or write a basic letter by the time they reach high school, she says.

"The social ladder is completely blocked at the bottom. If we get it working again, if we give fundamental skills to these students, then all those values have meaning. And not the other way round," she says.

Much has also been said about the difficult upbringing of the Kouachi brothers and their accomplice Amedy Coulibaly, who shot dead a policewoman on January 8 and held up a Jewish supermarket the next day, killing four shoppers.

Coulibaly grew up on a notoriously violent estate in the Paris suburb of Grigny.

Prime Minister Manuel Valls sparked a furore by denouncing the "territorial, social and ethnic apartheid" in parts of the country.

But for Mehdi Bigaderne, who grew up in Clichy-sous-Bois where violent riots erupted in 2005, Valls is spot on.

"When I was a kid, we would have fun giving names to estates, the Bamako tower, the Istanbul tower," says Bigaderne, founding member of a co-operative representing working-class areas

"It reflected reality, because there was a concentration of people of the same origin, and it's still true today.

"If you leave an entire fringe of the population together with the same problems (poverty, unemployment), it doesn't make for great chemistry."

By targeting a kosher supermarket, Coulibaly added to the growing insecurity among France's Jews, and a knife attack on three soldiers outside a Jewish centre on the French Riviera this week compounded these fears.

President Francois Hollande announced he would unveil a plan this month to fight anti-Semitism and racism.

Already on January 11th, millions of people took to the streets of Paris and other cities with the message that France would not be divided by fear or religious differences.

One month on, the Place de la République where the Paris rally began is still full of flowers and messages, a statue representing Liberty now decked out with a big, mock pencil to symbolize free speech.

But for some, this very freedom is now being eroded as scores have been jailed for Facebook posts or comments deemed to condone terrorism.

Beatrice Delaunay, an arts student who has come to read the messages of support at the base of the statue, says she feels people can no longer express themselves too freely.

"We're in a paranoid world."