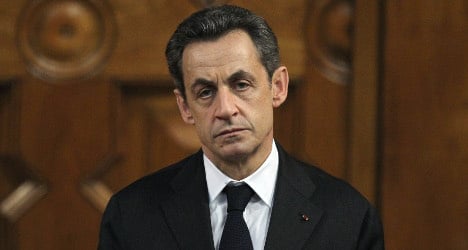 Nicolas Sarkozy saw his warning to UMP party chiefs over the threat from the National Front fall on deaf ears this week. Photo: AFP

"A victory for the National Front (FN) at the national level is no longer hypothetical," he told members of his conservative UMP party.

It came after Marine Le Pen's FN won the first round of a by-election in the region of Doubs in eastern France at the weekend and now faces a run-off with the Socialist Party on Sunday.

Sarkozy saw his party forced into third place, knocking it out of the running, and once again raising longstanding fears that its right-wing agenda has been usurped by the more radical FN. He said Sunday's by-election risked "exploding" the party.

Sarkozy, who only recently took the reins of the UMP ahead of a possible run for the presidency in 2017, found himself in an awkward position: should he tell UMP supporters to back their traditional Socialist enemy in order to defeat the rising threat of the FN?

In recent years, the party has side-stepped the question when it came up, telling its supporters to vote for neither party.

The policy is referred to as "ni-ni", meaning neither "ni front républicain, ni Front national", with "front Republicain" referring to the idea that the centre-left and centre-right should unite against Marine Le Pen's party.

While former president Sarkozy stressed that "we are not advising people how to vote", he did say the UMP was "asking people to take into account this dimension" that the FN could win power at a national level.

With the FN now riding high in opinion polls, parts of the UMP feel they should in exceptional circumstances throw their weight behind the Socialists to keep out the far-right.

Sarkozy's rival to become the UMP's presidential candidate, Alain Juppe, called for members to vote for their bitter Socialist rivals, saying the FN was now the party's "main political enemy." Another party heavyweight NKM also suggested voters should unite against the Front National.

But others in the party, notably former PM François Fillon disagreed and insisted the UMP should stick to its "ni, ni" stance that it has held in recent years.

And after a stormy party meeting on Tuesday it was those who backed the "ni,ni" position that came out on top, which represented a significant blow to Sarkozy's standing.

Whether UMP voters heed his call or stick to the party line will be revealed on Sunday in a vote that will give an indication of how the country is feeling.

Analysts suggested the National Front would benefit in the aftermath of the Paris terror attacks but opinion polls suggest that has failed to happen, with the ruling Socialist Party instead gaining a bounce in popularity.

Ironically, given his warning this week,  Sarkozy himself was accused of lurching to the right in the run-up to the 2012 presidential vote as he desperately tried to win over National Front voters.

He may have to employ the same tactics in 2017 if he decides, as is expected to make a bid to win back the Elysée Palace.