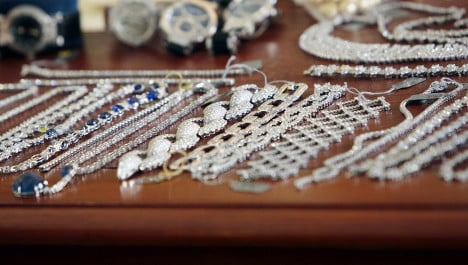 Of the suspects, six face 30 years in prison if convicted and the two others could be jailed for life.

The first robbery, which took place in October 2007, saw four armed and masked men sporting decorators' overalls hold up employees at the store in an upmarket part of the French capital.

The robbers had spent the night in the jewellery shop with the help of a security guard who let them in the previous evening.

After having threatened, hit and tied up employees, the thieves forced the director to de-activate alarms and open the safes. The robbers made off with 120 watches and 360 pieces of jewellery worth more than €32 million.

Then just over a year later, in December 2008, four men — including three wearing women's clothes and wigs — entered the same store with the help of the same security guard.

In less than 20 minutes, they took 104 watches and 297 pieces of jewellery worth 71 million euros and fled in a car.

Police found some of the booty at the home of one of the suspects, Douadi Yahiaoui, nicknamed "Doudou" — considered the brains behind the double heist.

But after a five-year investigation, nearly 500 of the jewels and watches have still not been found.

Yahiaoui's lawyer, Frederic Trovato, said the 50-year-old acknowledges he is not innocent but says he did not play as big a role as authorities allege.

Trovato said the security guard came to his client with the idea of the 2007 robbery, but Yahiaoui was scared to get involved and merely introduced him to some acquaintances.

"For the second (heist), he also recognises having collected information from the guard, having forwarded it on to the robbers and agreeing with them that he would hide the jewels and sell them off, or try to sell them off," Trovato said.

"But he did not take part in the robberies."

Several members of Yahiaoui's family are among the suspects — his brother-in-law Patrick Chiniah, 40, his brother Mohammed Areski Yahiaoui, 59, and the latter's son Faudile, 28.

"It's an exceptional case with odd aspects," said Eric Dupond-Moretti, the lawyer of one of the suspects.

"In television series on heists, they wear bullet-proof vests. Here it's fishnet stockings and high heels."