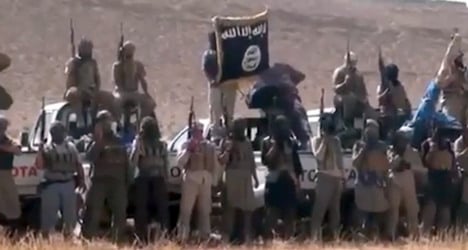 Isis fighters, line up, weapons aloft. The group's leaders have called for fresh attacks on France. Photo: AFP
In the video, an unidentified, masked jihadist is seen surrounded by militants calling on French Muslims to quit their country for Isis' self-proclaimed "caliphate", which covers parts of Iraq and Syria.
The video, which was widely shared on Twitter and jihadist forums by Isis supporters, shows the masked fighter calling for more killings in France.
He asks supporters to attack police and military targets, as well as those who participated in mass protests last month to condemn the killing of 12 people at the offices of French satirical magazine Charlie Hebdo on January 7th.
The attack was claimed by Al-Qaeda in the Arabian Peninsula, but has attracted praise from jihadist groups elsewhere.
The fighter in the video also demanded that France release Islamist detainees and allow them to leave the country.
Three soldiers were wounded in the French city of Nice on Tuesday by a knife-wielding assailant, leaving two injured, a police source said.
In September, France joined the US-led coalition carrying out air strikes against Isis militants in Iraq, but it has not joined the United States in its aerial campaign against the jihadists in Syria.