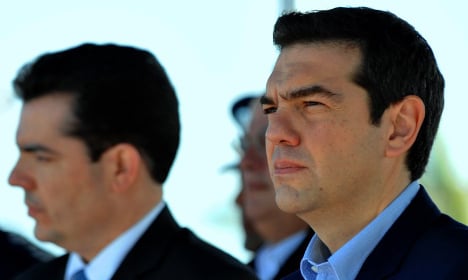 Greece's new Prime Minister Alexis Tsipras will be in Paris on Wednesday. Photo: AFP
The pair will meet to discuss whether France can lend the Greeks a hand in renegotiating bailout plans with international creditors, reported French news website Direct Matin.
The meeting will be a precursor to the Council of Europe, where the topic will be tackled again next Thursday.
Tsipras has been busy networking since the snap election in Greece ten days ago, meeting with Italian Prime Minister Matteo Renzi and European Commission President Jean-Claude Juncker this week already.
Renzi said on Tuesday that Italy would offer "the greatest possible support" and that an EU-Greece deal was "possible", reported The Local Italy.
Greek Finance Minister Yanis Varoufakis has also made a recent trip to Paris, talking with his French counterpart Michel Sapin about the Greece's €240 billion bailout and how to cure the country's debt "addiction".
He said that Greece was "desperate", but wanted to turn down the next promised loan tranche from the European Union, International Monetary Fund and European Central Bank (ECB).
"What this government is all about is ending this addiction," he said.
Tsipras, who heads Greece's new anti-austerity government, has recently calmed nerves in Europe by saying he did not intend to renege on commitments to the EU and IMF.
"It has never been our intention to act unilaterally on Greek debt," Tsipras said in a statement to Bloomberg News, adding that Greece needed greater leeway to tackle root problems in its economy, such as tax evasion, corruption and policies that favour only a wealthy few.
"We need time to breathe and create our own medium-term recovery programme," he said.
French President Hollande has already spoken out about Tsipras since his victory, congratulating him in a statement and sharing his hopes for a continued unity between France and Greece.
He recalled "the friendship that unites France and Greece" and expressed his desire for Tsipras to "continue the close cooperation between our two countries, to support the growth and stability of the eurozone, in the spirit of progress, solidarity and responsibility that is at the heart of our shared European values," the statement said.