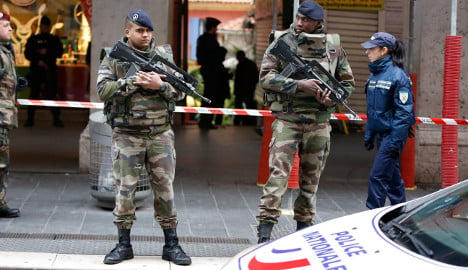 Soldiers stand guard in Nice, the day after three of their colleagues were attacked in a suspected terrorist attack. Photo: Valery Hache/AFP

Prime Minister Manuel Valls announced on Wednesday that the country's terror threat level would be raised for the Alpes-Maritimes département in the south of the country.

The anti-terror alert system known as Plan Vigipirate has been raised to "attack" level the day after three soldiers were injured when they were attacked by a man wielding a knife in the Riviera city of Nice. That basically means that there is a "threat of an imminent attack" and the government will deploy significant resources to boost security.

The region of Ile-de-France, which includes Paris, is also on the highest alert level after last months shootings that left 17 people dead.

"With regards to the particular situation that the city of Nice has just experienced, I have decided to increase the alert level, like we did in Ile-de-France four weeks ago, to ensure all the resources are put in place," Valls told the National Assembly.

French investigators were on Wednesday still interrogating the knife-wielding man who attacked three soldiers outside a Jewish centre in Nice, as questions resurfaced over security measures a month after the Paris attacks.

The attacker, identified as 30-year-old Moussa Coulibaly from the poor western suburbs of Paris, was already known to police who questioned him just days before the attack, when he was expelled from Turkey last week.

Police arrested him immediately after he knifed the soldiers in broad daylight while they were patrolling outside the Jewish centre — part of reinforced security measures introduced after last month's jihadist attacks in Paris.

"This attempted murder targeted soldiers because they were soldiers," Defence Minister Jean-Yves Le Drian said during a visit to the victims' barracks.

Coulibaly was expelled back to France from Turkey and was quizzed by intelligence services but released as there was not enough evidence to press charges.

"We can't consider it a failure every time security forces mobilize over individuals likely to radicalize … but legal action is not taken due to lack of proof," Interior Minister Bernard Cazeneuve said.

President François Hollande condemned what he called a "criminal act" and promised that the incident would be fully investigated.

France has deployed some 10,500 soldiers outside "sensitive" sites in the wake of the January terror attacks, notably outside Jewish and Muslim places of worship, schools and media outlets.

The government said that 830 sites were being monitored across France including 30 in Nice.