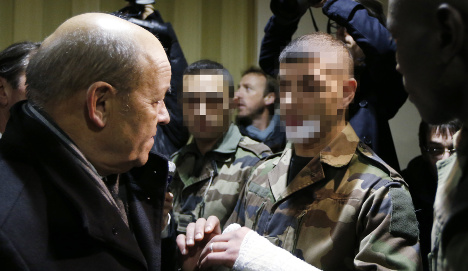 French Defence Minister Jean-Yves Le Drian (L) speaks with the three soldiers who were attacked by a knifeman in Nice. Their faces have been pixelated to hide their identities. Photo: Valery Hache/AFP

Bernard Cazeneuve was speaking after a man approached three soldiers in the middle of the afternoon in the Riviera city of Nice, pulled a knife out and attacked them with an "intent to assassinate them".

The minister, who visited the scene of Tuesday’s attack along with defence minister Jean-Yves Le Drian said: “We are facing a new phenomenon – the terrorism of open access. That requires us to mobilise substantial resources.”

The attack took place in broad daylight in Nice as the troops were patrolling outside the Jewish centre as part of reinforced security measures introduced following last month's jihadist attacks in Paris that left 17 dead.

Two of the soldiers sustained knife wounds, but their lives are not in danger.

Their attacker, named by several sources as 30-year-old Moussa Coulibaly, was immediately arrested.

He is not believed to have any connection to Amedy Coulibaly, the gunman who killed four at a kosher store during the Paris terror attacks.

Anti-terrorist prosecutors in Paris took charge of the investigation and the suspect's home in Mantes-la-Jolie, a deprived district in Paris' northern suburbs, was searched following his arrest.

A second person who was seen with him before the incident was also detained.

Coulibaly was known to police in France. He had been picked up and questioned in mid-December after "aggressively" trying to spread his beliefs in a sports hall in Mantes-la-Jolie, a source said.

A Turkish security source said he had been refused entry to Turkey when he landed at Ataturk airport in Istanbul on a flight from Rome on January 29.

Turkey is frequently used as an entry point by jihadists seeking to go to fight in Syria.

Interior Minister Cazeneuve said Coulibaly was interviewed by the French intelligence services on his return home from Turkey, but “he showed no signs that he was about to act.”

He was however placed under surveillance “to find out exactly what he was doing in Nice, where he had no roots or contacts,” the minister said.

Cazeneuve added that 1,200 French nationals had travelled to Iraq and Syria, often via Turkey, 580 of whom have returned.

For his part defence minister Le Drian commended the “sang-froid” of the three soldiers, “who responded, but did not overreact, in the face of this assassination attempt.”

Le Drian added that the men were targeted for the simple fact they were French soldiers.

President Francois Hollande condemned what he called a "criminal act" andpromised that the incident would be fully investigated.

France has deployed some 10,500 soldiers outside "sensitive" sites in thewake of the January terror attacks, notably outside Jewish and Muslim places of worship, schools and media outlets.

The government said that 830 sites were being monitored across France including 30 in Nice.