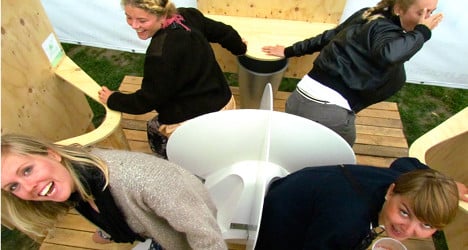 The urinals were first tried out at a musical festival in Denmark. Photo: uiwe.dk

When the weather plays along, Parisians love to gather around the St. Martin Canal to wind down and enjoy a few bottles of wine. But once the need for the bathroom kicks in, many women are faced with a dilemma: while there are urinals around for men, women have to either search for a bartender nice enough to let them use the pub's bathroom or resort to taking care of business out in the open.

To solve the problem, a French woman suggested the installation of about a dozen urinals for women.

She has submitted her idea to "Budget participatif", a Paris initiative inviting citizens to create project ideas aimed at improving the city.

The open-air urinals she has in mind are created by Danish company Peebetter and are worth around €5,000 each. They can accommodate up to four women at a time and are used in “a semi-squat stance that requires no touching”, according to the company's website.

The so-called "Pollee" urinals come in three different variations. "Pollee Shy" offers the most coverage, "Pollee Topless" is a little less discreet and "Pollee Naked" for the "free spirits" offers by-standers a full frontal view of what's happening in the urinal.

Spokesperson of the feminist group "Osez le Féminisme", Claire Serrecombe, sees the proposal as a step in the right direction.

"Nightlife outside is aimed at men. There are plenty of sanitary facilities for men but they aren’t really adapted to women," she told The Local. "I think it's a very interesting idea, but the design can still be improved." A woman trying out one of the urinals. Photo: uiwe.dk

But would anybody actually use the urinals?

“It’s a great idea,” 21-year-old Justine told The Local. “There’s nothing for women, men have it much easier. It either takes you ages to find a bathroom or you just have to do your business somewhere outside, so I’d definitely use it.”

“If I was wasted I’d use them,” she said. “I prefer going to the bathroom in a bar but it’d still be better than squatting down in between two cars.”

People can vote on more than 1,000 project ideas presented on the "Budget participatif" website, and the urinals have received more than 20 votes so far.