SHARE
COPY LINK
1. All the trees in Paris are referenced and measured. And there are 470,000 of them. Photo: Abob Bob/Flickr
2. There are 181 places in the city where you can get an espresso for €1. Even better, there's a map to help you find them.
3. Open terraces. If you were to spend each day of your life in Paris visiting a different open terrace (of a bar, cafe, or restaurant), then it would take you 29.8 years to see them all (and who knows how many new ones will open in that time!). Yes, there are 9,057 of them.

Photo: A cafe called Les deux magots in central Paris. Photo: Robyn Lee/Flickr
4. There are 31 street condom-vending machines in Paris, provided by the Town Hall. And in case you're in a tight spot, here is a map to all of them.
5. In the whole of Paris, there is only one stop sign, situated at the exit of a building company in the rich 16th arrondissement. The traffic system in Paris is mainly based on giving way to those coming from the right.
Although beware, this sign is apparently often stolen.
6. The main bell in the Notre Dame Cathedral weighs over 13 tonnes. And it's called Emmanuel. Photo: Stéphanie Kilgast/Flickr
8. The shortest street in the city – at just 5.75 metres – is Rue des Degrés in the 2nd arrondissement. In the central 2nd arrondissement, this Rue is nothing more than a staircase. Photo: Google Street View
9. If you like baguettes then you're in the right city because there are 1,784 bakeries in Paris. Photo: Marco Bernardini/Flickr
10: And lastly, there are plenty of bars too, although not as many as there are bakeries. In fact there are 1,124 bars in the city at your disposal. There are plenty of places to grab a drink in the Latin Quarter of Paris. Photo: Greg Dunlap/Flickr
Enjoy this list? Be sure to check out the ten Paris streets you just have to walk down.
All facts courtesy of the folks over at Smarter Paris. Check out their website here to find out more about their new app. 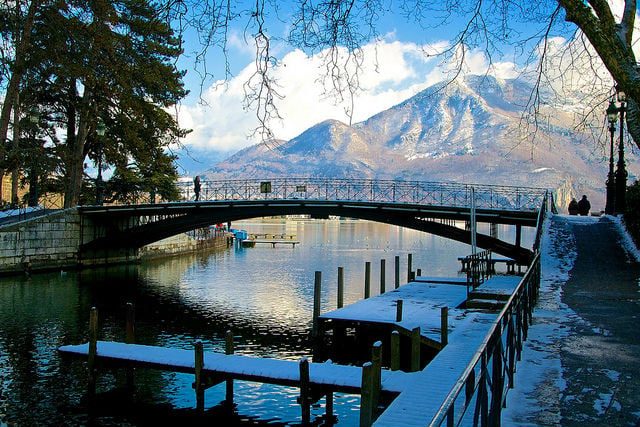 TRAVEL
14 towns in France that are perfect to visit in winter
Url copied to clipboard!