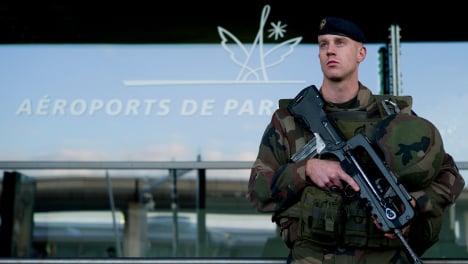 France has bolstered security across the country since the attacks on Charlie Hebdo. Photo: AFP
Abu Mohamed al-Adnani, referring to attacks in France, Australia, Canada and Belgium, urged "Muslims in Europe and the infidel West to attack the Crusaders where they are".
"We promise that in the Christian bastions they will continue to live in a state of alert, of terror, of fear and insecurity… You have seen nothing yet," the recording said.
He added that the group would consider as "enemies" those Muslims who were able to carry out such attacks but failed to do so.
The threat is just the latest instance in which the jihadist group has urged Muslims to carry out attacks in the West.
It comes after 17 people were killed in deadly assaults on January 7-9 in Paris against Charlie Hebdo magazine and a kosher supermarket.
Of the three attackers, only one appeared to have pledged allegiance to the Islamic State, but the group endorsed the killings in the message.
It also made reference to attacks last year in Australia, Canada and Belgium.
Western intelligence agencies have regularly raised the alarm about the possibility that Western sympathisers of IS and other jihadist groups could carry out attacks in the West.
Their concerns have been heightened by the thousands of Western recruits who have flocked to Syria and Iraq to fight alongside jihadist groups.