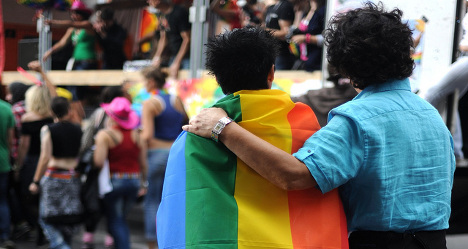 A gay bar in Toulon has been bought by a Catholic group. Photo: Guillaume Paumier

After a popular hang-out among gay men in the southern city of Toulon had to file for bankruptcy, the premises were auctioned off to the highest bidder, which turned out to be a traditionalist Catholic group, the French website Yagg reports.

With the help of a €15,000 donation from a priest of the Toulon diocese, the Missionaries of Divine Mercy bought up the bar, which sits right next to the group's church.

However, the change in ownership didn't sit well with some of the members of the local gay community, including 41-year-old Titi, president of the Gay Power Toulon association.

"I would have preferred if someone else got it but they've wanted the place for years," he told The Local.

"To them, it's like Satan is right next to their church."

After closing the deal, the Catholic group published an online statement explaining that the acquisition of the bar, which will be used as a meeting place, is part of an effort to evangelize the neighbourhood.

The statement further reads that “the bar of Sodom will become the bar of mercy,” but Titi argued the "die-hard Catholics" may not be able to use the place straight away.

"They'll need a whole bunch of exorcists to get rid of everything that's happened in there," he said.