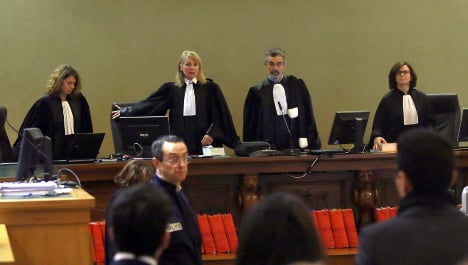 President of the Court House in Bordeaux, Denis Roucou (C) waits, on January 26, 2015, to lead the first day of the trial of ten people charged with exploiting France's richest woman Liliane Bettencou

The deputy prosecutor told the court on Monday that Alain Thurin, 64, Bettencourt’s former nurse, won’t be appearing on trial this week after he tried to take his own life on Sunday.

Thurin was one of ten people close to France's richest woman Liliane Bettencourt due to go on trial on Monday charged with exploiting the frail L'Oreal heiress in an explosive drama that began with a family feud and put a president in the court's crosshairs.

“We don’t know if he is dead or alive,” the court’s president Denis Roucou said.

Thurin was charged with “taking advantage of [her] frailty” (abus de faiblesse).

The case is expected to go on for five weeks.

It centres around a bitter mother-daughter feud, a butler's betrayal, advancing dementia, unscrupulous friends and cash-filled envelopes for politicians. Although these are only some threads of the complex web surrounding the world's 12th biggest fortune that the court will have to untangle.