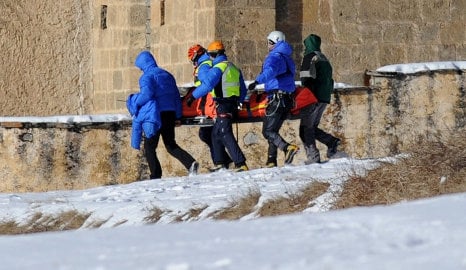 Rescuers carry the body of one of six avalanche victims past the church in the village of Ceillac near the French border with Italy. Photo: JEAN-PIERRE CLATOT / AFP

The party of six, experienced skiers aged between 50 and 70, left on Saturday for a hike, known as ski touring, in the range straddling France and Italy but triggered an avalanche, the office of the Hautes-Alpes region said.

The bodies of three victims were found at the foot of the avalanche before sunrise in a small valley at an altitude of 2,500 metres, before bad weather forced a halt to rescue efforts.

A team of 18 rescue workers, backed by a helicopter and sniffer dogs, later discovered the rest of the missing team of hikers.

"The bodies of the other three victims were also found at the site of the avalanche," Captain Sarah Chelpi of the mountain police told AFP.

Around 30 people die annually in avalanches in France, whose mountain ranges attract snow buffs from around the world. The Association for Snow and Avalanche Studies said 11 people had already died since the start of the 2014/2015 winter season. This week has been particularly deadly for snow sports.

Two skiers, aged 51 and 60, were found dead Thursday after being swept away in an avalanche in the Ecrins mountain range in the Alps.

On Friday a 46-year-old woman died in an avalanche in the Savoie region in the Alps straddling the border with Italy, and a British skier fell to his death after losing a ski while descending Mont Blanc.