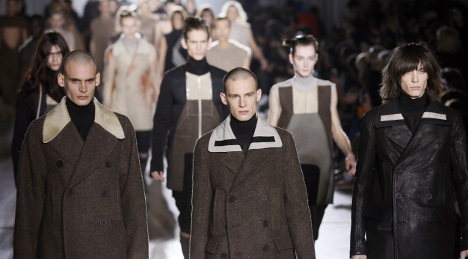 Looking back to the 1980s and 1990s is proving something of a trend in a lot of the men's collections, especially with suit jackets.

Celebrity-wise, nobody incarnated the retro vibe better than former supermodel Kate Moss and singer Bryan Ferry, both of whom attended the Louis Vuitton show.

The artistic director for the brand's menswear, Kim Jones, used the show to pay tribute to Christopher Nemeth, a fellow British designer who died in 2010 after achieving cult status for his work in London in the 1980s.

Camel and grey colours dominated on the catwalk, while a Nemeth print, showing the close-up fibres of a rope, was ubiquitous.

Rick Owens took one look at the menswear brief — to dress men for the chilly tail end of this year — and decided to throw it away. The briefs, that is.

Some of his male models paraded with no underwear in black or beige dress-like outfits that had the crotch area cut away.

The creations may not be widely seen or even copied, but it got an online buzz going for the attention-hungry US designer. The crotchless outfits sent a ripple across the internet. Photo: AFP

The label doing the most to marry structural design to fashion was the Japanese house Issey Miyake, which brought out a collection paying homage to a Scottish architect and artist Charles Rennie Mackintosh, who died more than eight decades ago.

Tartans draped shoulders and silk scarves adorned necks in a parade notable for sharp, dark suits boasting ovals and grids, and set off with splashes of red and purple.

And everywhere was a rose motif — a Mackintosh trademark picked up by Issey Miyake designer Yusuke Takahashi.

In a gritty underground parking garage off the Champs-Elysees, the label Andrea Crews injected edginess into proceedings with a display of streetwise fashion.

The collective, headed by designer Maroussia Rebecq, had attendees file past a couple of laser-lit cars and a dancing girl to get to the improvised catwalk, where industrial-grade German techno music trobbed and shrilled.

The theme of the collection, showcasing urban outfits tending towards space-age tracksuits in contrasting silver and blacks and whites, was "Race and Rave".