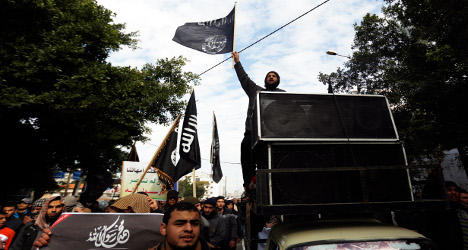 Many people living in France have left the country to join jihadists. Photo: AFP

He had a promising graphic designer job, plans to be a wedding videographer and was a star sportsman in his French town.

So how did Youssoup Nassoulkhanov end up in an Islamic State group video praising the Paris attacks?

The streets of Schiltigheim in the Alsace region of eastern France are not a terrorist breeding ground.

Although the town has never quite recovered from the shuttering of factories in the 1980s, and a fifth of the population remains unemployed, it still has a quaint feel and is just 10 minutes from the charming, busy centre of Strasbourg.

Until he disappeared last summer, the polite, hard-working 20-year-old working in the graphics department of the town hall didn't ring any warning bells.

"We talked, we joked around, he was a good kid. He had no hatred for France or the French or non-Muslims," said Yann Lymand, who worked next to Nassoulkhanov for over a year.

He says the person he knew is impossible to square with the bearded, Kalashnikov-wielding Nassoulkhanov in last week's video for the Islamic State group in Syria, praising the jihadists who killed 17 people in Paris this month.

"There will be more and more of these operations in the whole of Europe, God willing," says Nassoulkhanov in the video.

"To those brothers who can't come to Islamic State territory, do whatever you can. Kill them, slit their throats, burn their cars, burn their houses," he says.

Nassoulkhanov, a Russian from the Chechen region who moved to France when he was 15, had worked at the local council since May 2013 on a trainee programme.

For Lymand, who took him under his wing, prepped him for a full-time job and helped him through housing and personal difficulties, the video was a shock.

There are few clues to what drove Nassoulkhanov's radicalization.

He was frustrated at supporting his whole family and had fought with his father. There were rumours of a girlfriend not accepted by the tight-knit Chechen community.

One Muslim colleague says Nassoulkhanov spent longer and longer hours at the mosque, sometimes four or five a day during Ramadan.

But if he had radical thoughts, they were well hidden.

He was highly skilled at "Street Workout", a strenuous form of gymnastics and acrobatics, and practised almost daily with youngsters from many different backgrounds in parks around the town.

He was good enough to compete in national championships and appear in a TV news feature on the sport last year.

He also loved video and filmed weddings for the Chechen community — often travelling to Paris to do so. He was excited about plans to set up his own wedding video business.

Then last summer, he just disappeared.

Nassoulkhanov's story is a reminder that jihadists come from all walks of life, but his case is still relatively rare.

A study by German intelligence, leaked last year, showed the vast majority who have left Germany to fight in Syria were uneducated and unemployed.

Of nearly 400 jihadists investigated, only a quarter had finished school and two percent university. Barely one in ten had a job. Two-thirds had a criminal record.

"Poverty makes terrorists not because they are angry at being poor, but because it takes them into certain walks of life, such as prisons. It also makes people vulnerable to recruiters."

The Paris attacks confirmed the stereotype: all three assailants were from deprived housing projects and broken homes.

But examples still abound of people like Nassoulkhanov who give up promising futures to join a bloodthirsty global jihad.

Dounia Bouzar, who runs an anti-radicalisation centre in Paris, says extremists are consciously targeting a wider cross-section of society.

"They offer different types of dreams and utopias. They try to reach young people who might be in the second year of studying political science or medicine — from stable, loving middle-class families."

Experts have long since realized that chasing a definitive profile for a terrorist is a fool's errand.

"Radicalization research has stagnated," said Hegghammer. "We've come to the end of what we can do with the available information and there are no clear conclusions."

There is a wide range of factors that can push someone into violent jihad, and two people with the same disposition can go in radically different directions.

"Some are action-seekers, some are trying to get clear answers to things, some just enjoy sub-cultures," said Hegghammer.

The result is very little warning when a relative or friend suddenly disappears and then crops up in a video from Syria.

"It's not like Youssoup didn't have anything in his life," said Lymand, back in Schiltigheim. "To see him like that in the video, it was impossible for me to believe."