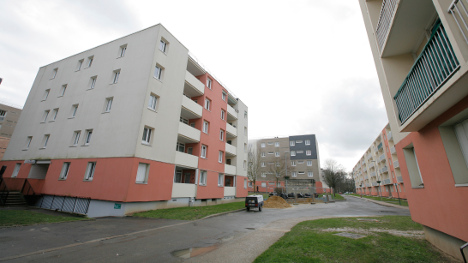 A set of apartment blocks in Fleury Merogis, in the suburbs of Paris. Photo: AFP

Although many were left scratching their heads as to what he meant, it is not the first time that Valls has raised uncomfortable issues in the aftermath of this month's jihadist attacks in Paris.

Valls has made a link between the January 7-9 attacks by three radicals, who killed 17 people, and inequality. The three assailants were all from deprived housing projects.

Earlier this week, the man who was mayor of the tough multicultural Paris suburb of Evry for 11 years said parts of France were riddled with "territorial, social and ethnic apartheid".

His remarks sparked a torrent of indignation in a country that prides itself on its commitment to equality.

Undeterred, Valls put forward the idea of a "settlement policy" on Thursday, without giving details of what it would entail. 'How can we manage?'

France is notorious for its "banlieues", or grim, high-rise suburbs, where low-income families, often of immigrant origin, languish amid high unemployment, discrimination and simmering social tensions.

"I can't stand to see this confinement… that in schools you only find students from poor families, who often have just one parent, all from immigrant families who have the same cultures and the same religion," the Spanish-born premier said.

"How can we possibly manage?"

Analysts tried to decipher what he meant.

"It's about how to impose social diversity and to avoid social categories grouping together," said Marion Carrel, a sociologist at Lille 3 University.

"It's about deciding to allocate social housing to specific types of applicants, and therefore trying to mix (people) together along social criteria, and also ethnic criteria, even if that is prohibited by law.

"It's a big debate among sociologists. Some say social diversity must not be imposed."

Geographer Christophe Guilluy said Valls was currently in a phase of "hardcore communication."

"He is saying that he has understood the tensions in French society, and he will try to be firm on the subject although he has no solutions to hand."

Throughout his political career, the popular Valls, 52, has never shied away from controversy.

In 2009, when he was still mayor of Evry, he created a stir when he was caught on camera at a local garage sale jokingly saying it would be good to add a few more white people to the mix.

He defended those remarks by saying he wanted to fight against ghettos.

As interior minister from May 2012 to March 2014, Valls's tough-talking on crime and insecurity made him every right-wing voter's favourite leftist, angering some members of his own government.

Cecile Duflot, the Greens minister who left the government last year, famously nicknamed him Pepe after a particularly stubborn Spanish boy who features in one of the Asterix stories.

While the approval ratings of the Socialist government plummeted over the course of its first two years in office, the father of four bucked the trend.

It was only after becoming prime minister in April that his approval ratings started to tail off, dragged down by stubbornly high unemployment and stagnant growth.

But since the attacks in Paris his popularity has soared again. A poll by Ifop research company showed his rating jumping 17 points to 61 percent, higher than when he took the helm of government.