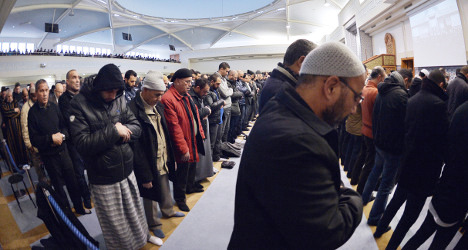 Muslims pray at the Strasbourg Mosque in eastern France. Photo: AFP
The 'national prayer' is an initiative of various Muslim groups, including the Union of France Mosques.
"We already prayed individually last week. But this time, it is the entire Muslim community that will rally to speak with one voice," Mohammed Moussaoui, president of the Union of France Mosques, told French newspaper Le Parisien.
It also seems that the 'prayer for France' could become a weekly prayer, following a statement from the RMF, the Rassemblement des Musulmans de France (the French rally group for French Muslims).
The group said last week that it would organize "a prayer every Friday from now on, so that God watches over France" and the country "could live and prosper in peace, harmony, and serenity".

Meanwhile, there have been record numbers of anti-Muslim incidents reported in France of late. Since the terror attacks in Paris two weeks ago, there have been 128 incidents registered – which is almost the same amount as in the whole of 2014.
The National Observatory Against Islamophobia said these incidents, which include 33 acts against mosques and 95 threats had been reported to authorities since the January 7-9th shooting spree by three French jihadists that killed 17, compared to a total of 133 such incidents in 2014.
The tally for the two weeks since January 7th do not include incidents in Paris and its surrounding region, where police have yet to release their figures.
"But these figures do not reflect reality, as many Muslims don't want to systematically file a complaint when they are victims of xenophobic acts, convinced that there will be no follow-up, which is unfortunately often the case," the observatory said.
Muslims in France – 'They say we're not French'