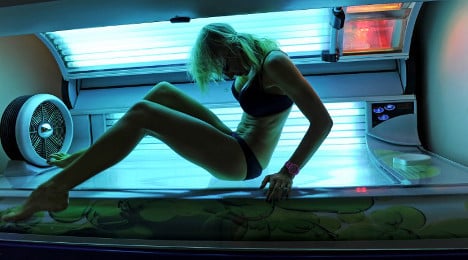 Could sunbeds soon be banned in France? Photo: Greg Wood/AFP

The association “60 Million Consumers” called for the nationwide ban after carrying out an investigation into tanning salons, which research shows enhance the chances of developing skin cancer.

The consumer rights group stressed not only the health dangers of artificial UV rays but also the fact that many staff at the salons ignore safety measures.

As part of its investigation 50 “mystery clients” were sent to sun bed lounges in the cities of Paris, Lyon, Marseille, Lille and Strasbourg.

Some of the “clients” should have been refused entry because they were pregnant or because of their skin type, but almost all were welcomed without being questioned.

“Of  the 50 people who were sent, three quarters were accepted into the tanning booths, when they shouldn’t have been,” said the editor of the association’s web site Thomas Laurenceau.

“We are shocked to see how easy it was to enter the booth, even for a pregnant woman. They were met by people who continued to say things that are completely prohibited like: ‘this will prepare your skin for the sunlight,’ which is totally false".

And the organisation is right to raise concerns.

According to figures from the Institute of Public Health between 500 and 2,000 deaths will be caused by radiation from artificial UV rays in the next 30 years.

Nevertheless tanning centres have become increasingly popular in recent years, with some 40,000 available to the public.

The fact that you can pay as little as €5 for a 15-minute session is seen as the reason why they have become so popular in a country that is hardly short of sun, at least in the south.

If the French government does take the advice of “60 Million Consumers” then it would follow in the footsteps of Brazil and Australia, which introduced a nationwide ban on sunbeds earlier this year.

Cancer Council Australia welcomed the ban, which it has long pushed for, adding that it would help to reduce rates of skin cancer, which affects two out of three Australians by age 70.

Photo: Bora Ucek
About 3,400 of some 64,000 new cases of cutaneous melanoma diagnosed in 18 European countries every year are related to sunbed use — more than five percent, said a statement issued by the BMJ medical journal.
The risk doubled if tanners started before the age of 35.
The findings were based on an analysis by researchers of 27 studies on skin cancer and sunbed use conducted between 1981 and 2012 in Britain, France, Germany and other countries.
They found a "1.8 percent increase in risk for each additional sunbed session per year", said the statement.
"The authors believe that earlier studies have tended to underestimate the risk of indoor tanning because the use of these devices is relatively new."
The study authors from the International Prevention Research Institute in France and the European Institute of Oncology in Italy urged tougher regulation and restricting children's access to tanning salons.
SHOW COMMENTS
Url copied to clipboard!