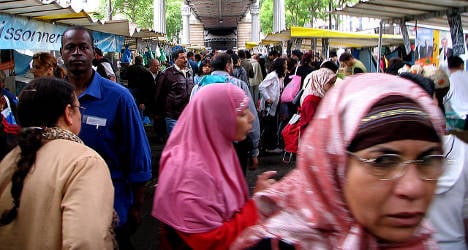 The French Prime Minister Manuel Valls caused a stir this week when he said France was suffering from “social and ethnic apartheid”.

While many castigated him for his choice of words, few disagreed that France has a longstanding problem that numerous governments have either failed to deal with or turned a blind eye to.

After riots spread across French cities in 2005, the conclusion was that France was failing to integrate second-generation youths, most of them Muslims from North Africa, living in the poor “banlieues” on the edge of cities, out of sight, and out of mind. Some of the damage left after the Paris riots in 2005. Photo: AFP

Ten years later, after Cherif and Said Kouachi, two men born in France gunned down the staff at Charlie Hebdo, the same conclusions were being made.

On the streets of the 18th arrondissement in Paris, a district which is home to the picturesque Montmartre as well as more deprived areas around La Chapelle, it seems many Muslims do not feel much loyalty to France.

“The French say that we aren’t French,” Hasfa said. “People always ask me: ‘Where are you from?’”


The women's accessories shop. Sira and Hasfa preferred not to be photographed. Photo: The Local

Other Muslim women shared their view.

“I felt French until people told me I wasn’t,” said 28-year-old Aïcha who was also born in France. “We have never felt integrated. It's frustrating.”

Although the government said the laws were necessary to reinforce France’s secular values or for security reasons, many Muslims felt they were specifically targeted to pander to the rising far right.

“People see a woman wearing a veil and think she’s not educated, that she doesn’t know anything, but in reality that woman might be a doctor or a teacher,” Aïcha added.

“When I see how everyone’s religion is respected in Sweden, I wish it could be the same in France. We feel excluded from society because we wear the veil,“ she said.

“We’re not here to shove the Koran in your face, we’re not here to make you listen to Islamic chants, we’re not trying to convert you. Respect our religion and let us live.”
Her friend, 26-year-old Mariam suggested France would be better off teaching about different religions in schools rather than reinforcing secularism.

“Why don’t we learn religion at school? Maybe then we would start respecting all religions.”


Mariam thinks religion should be taught at French schools. Photo: The Local

International footballer Sofiane Feghouli, who was born in a suburb of Paris but plays for Algeria, raised a few eyebrows this week when he explained his motives to play for the country where his parents are from.

“With all that I have experienced, I don't feel fully integrated into French society… I just feel Algerian,” said the footballer.

The testimonies of Feghouli and those The Local spoke to are supported by studies that have been carried out regarding the issue of the integration of France’s five to six million Muslims.

A major study into the immigrant segregation in the suburbs of Paris was carried out in 2011. By studying two districts that were mainly populated by immigrants from north and west Africa, researchers found that many residents felt totally separated from the French.

Islamic values are replacing those of a republic which failed to deliver on its promise of “equality”, and the residents of the suburbs increasingly do not see themselves as French, the researchers said at the time.

Majid Jarroudi from France’s Agency for Entrepreneurial Diversity says the problem of disengaged second generation youths lies in a lack of equality.

“The French Republic doesn’t treat the youths in the poor suburbs the same way it treats other citizens,” he told CNN.

But not everyone feels cut off from the French.

A 54-year-old Muslim man of Algerian origin who works at the Doudeauville restaurant, and who did not want to give his name, told The Local: “I’m a citizen of the world. I love the country, the language, the culture. It was natural to get French citizenship. My life is here.”

And French actor Jamel Debbouze gave a passionate interview on TV this week saying he was proud to be both French and Muslim. “France is my mother, no one should hurt my mother,” he said in relation to the terror attacks.

Other immigrants are accepting of the fact that living in France means there are different principles and values to respect.

Yacine Dahmani is a 22-year-old working in the perfume industry. He was born in Algeria and came to France when he was 15.

“I feel human before anything else,” he told The Local.


Yacine was born in Algeria, and doesn't feel French. Photo: The Local

“I have both Algerian and French nationalities but I cannot say that I am French. But I respect French laws. My wife wears the veil. It’s part of our religion but we have to respect the rules of the country we live in.”

However after the Paris terror attacks there are fears that France’s Muslims will once again be left out in the cold as the rest of the country unites with a new-found sense of solidarity.

Leaders of the Muslim community have urged their followers to remain calm despite the “provocation” of another Muhammad cartoon on the front of Charlie Hebdo as well as over 110 Islamophobic incidents since the attacks.

Last week a group of Imams united in publicly singing the Marseillaise to try to force home the idea that it is possible to be feel both French and Muslim at the same time.

But many Muslims are worried things will only deteriorate in the aftermath of the attacks.

“The mosque used to be a place of peace but now there’s a feeling of insecurity. While some of us pray others are guarding the doors. It’s a pity,” a 24-year-old Muslim graphic designer told The Local.