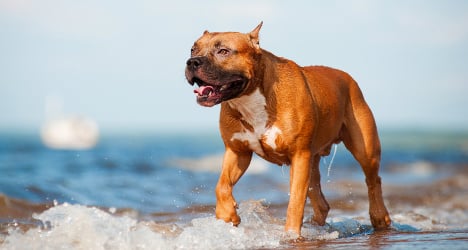 The two dogs 'Itler' and 'Iva' have been given new names. Photo: Shutterstock

Following the mayor's request, the owner of the American Staffordshire Terriers "Itler" and "Iva" has agreed to rename them "Ilisa" and "Isio 4".

A few months ago, the mayor refused to sign a license for the dogs in September because of their controversial names.

"I don't want to sign this licence … of course 'Itler' and 'Iva' make you think of Adolf Hitler and Eva Braun, a dubious play on words," he said at the time.

"I have written to the local prefect to ask him what I can do. In the meantime, I'm not signing," he told AFP, adding he believed the owner of the two dogs was a local National Front official.

The owner had already secured an initial licence – required in France for dangerous dogs – but the names had apparently not raised eyebrows at the time.

Neither the local prefect nor the owner could be immediately reached for comment.

There is in theory no restrictions on naming animals in France … with one exception – you cannot call a pig Napoleon, due to a law aimed at preserving the image of the Emperor which is still on the statute books.