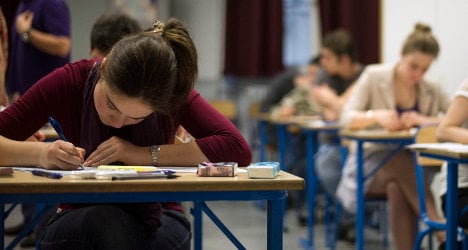 Just over two weeks after the terror attacks France unveiled a raft of measures aimed at backing the authority of teachers as well as ensuring Republican values are upheld in schools.

The plan, that will cost €250 million over three years, was presented by Education Minister Najat Vallaud-Belkacem the day after President François Hollande outlined the changes he feels are needed in French schools.

In a speech on Wednesday night Hollande backed teachers saying they were on the “front line” in the battle to defend French values.

He vowed that any incident that goes against the values of the Republic will be dealt with severely.

Hollande’s keynote speech on education came after a number of worrying incidents in the days after the terrorist attack on the Charlie Hebdo offices.

As politicians evoked a newfound national unity following the attacks, there were up to 200 incidents of dissent in schools as many students refused to respect the nationwide minute’s silence for the victims.

Teachers have told of how they have struggled to encourage pupils to pay respects to the victims.

“Why should we have to do it? You can't force me. They had it coming,” was the reaction of some students in one predominantly immigrant class, AFP reported.

Hollande has waited until some of the emotion around the terror attacks died down, but on Wednesday night he made it clear that any kind of rebellious behaviour that is not in line with Republican ideals will not be tolerated.

Here’s an outline of what France plans:

During the recruitment process, aspiring teachers will be tested on their ability to teach the values of the Republic. Also, the teaching of secular values will become an important part of the training of future teachers.

Hollande flung his full support behind France’s teachers, who in the aftermath of the attacks “had to deal with all kinds of reactions provoked by the these horrors: emotion, fear, silence, sometimes denial and there was also provocation, at times.”

Hollande stressed that the incidents should be “neither exaggerated or underestimated but looked at clearly.”

However he added that “any kind of behaviour that questions the values of the republic or teachers’ authority will be brought to the schools' headteachers. Every incident will be followed up.

“Each time that dignity or equality between girls and boys is called into question or words are uttered that go against the fundamental values of the school and the Republic, there will be action taken,” he stressed.

Vallaud-Belkacem’s plan on Thursday stresses the importance of restoring the authority of teachers through the learning of the “rules of civility and politeness”.

One way they plan to boost teachers' powers will be with the signing of a “charter of secularism” by students – and their parents, every September. The charter will lay out rules specifying the conduct pupils must show in class to ensure respect and politeness.

Any student who commits an offence, or presumably disrespects the Republican values, will find themselves having to carry out community service, perhaps with the red cross or Unicef.

All pupils in elementary schools will undergo a training course, which will centre around moral and civic education.

Headteachers will receive “enhanced training to help them detect the early signs of radicalization among pupils.

The president also wants to set “réserves citoyennes” which are essentially groups of volunteers that will be established in each regional education authority who can visit schools to raise awareness of different topics.

These people could come from the world of business, journalism or culture, Hollande envisages. To reaffirm the French principal of secularism or laïcité as it is called in French, Hollande announced that a special secularism day will be celebrated in schools all around the country on December 9th from this year onwards.

The education minister Vallaud-Belkacem says grants that are set aside for the country’s poorest students will be increased by 20 percent.

When pupils reach the age of eight or nine (CE2) they will undergo an evaluation to ensure they have a good level of French language. The evaluation will be done to identify difficulties and set up “an appropriate response to the needs of each child.”