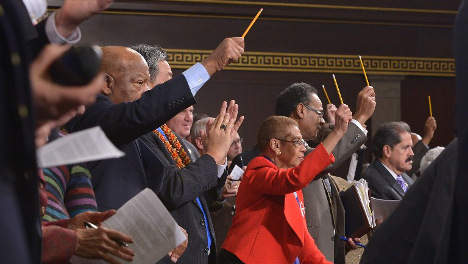 US lawmakers pay tribute to the victims of the Paris attacks by holding up pencils. Photo: AFP
Democratic Representative Gwen Moore led the show of support in which about 40 lawmakers — mainly Democrats — held up and waved yellow pencils as Obama declared the United States stands "united with people around the world who've been targeted by terrorists, from a school in Pakistan to the streets of Paris."
Referencing how the pencil has become a global symbol of free speech in the wake of the brutal attack on the French satirical magazine Charlie Hebdo, Moore's office called the symbolic event a "unique opportunity to join our global partners in showing our collective support and solidarity."
Crowds in several cities have taken to raising pencils skyward in memory of the 12 killed earlier this month at the magazine. Tributes to the fallen cartoonists have cropped up across Paris too, with supporters leaving pencils, candles, and flowers at areas of significance across the city.
Url copied to clipboard!