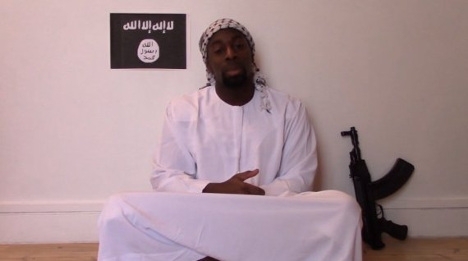 A screen grab from a video of a man resembling Amedy Coulibaly.
French media reported on Wednesday that Amedy Coulibaly was understood to have been pulled over by Parisian police on December 30th last year.
He was driving a rental car, with his partner Hayat Boumeddiene in the passenger seat, according to the satirical Le Canard Enchaîné magazine.
Police searched their database for Coulibaly, who only had a provisional license at the time, and found he had been labelled as a "dangerous" criminal with connections to radical Islamism. Police were advised to question the man without arousing his suspicion.
It is reported that officers raised the flag with their senior colleagues, but that nothing came of it.
The car was reportedly rented in the name of Coulibaly's partner Boumeddiene, who later drove across the border to Spain, flew to Turkey, then fled to Syria.
PROFILE: THE MOST WANTED WOMAN IN FRANCE
Prime Minister Manuel Valls announced plans last week to ramp up intelligence capabilities, aimed at amending the faults that lead to the country's "clear failings" over the Paris terror attacks.
Seven days after the police check, two Islamist gunmen slaughtered 12 people at the offices of Charlie Hebdo. In the following days, Coulibaly killed four people after staging a hostage drama at a kosher supermarket on the eastern side of Paris.
Police shot Coulibaly dead on the scene.
To limit the overwhelming burden on our moderators, it will not be possible to comment on this article. Feel free to join the conversation on our Facebook page.