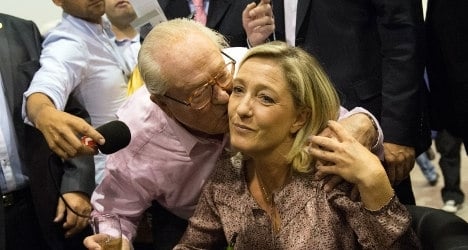 Marine Le Pen and her father Jean-Marie Le Pen are banking on a win for left wing radicals Syriza in the Greek general election. Photo: AFP

Le Pen said her support for Syriza, who have a three-percent lead in the polls ahead of Sunday's election, was "completely coherent" and "does not make me a far-left activist".

"We do not agree with all of their programme, especially on their plans for immigration. But we will celebrate their victory," she said.

"There is a fracturing in Europe, which is seeing the people taking power against the totalitarianism of the European Union and their accomplices, the financial markets," she added.

Dimitris Papadimoulis, who represents Syriza in the European Parliament, said in a Twitter message: "Syriza's programme is completely different from that of the far-right.

"Le Pen's alleged 'sympathy' for Syriza is false and disgusting."

Syriza and their boyish leader Alexis Tsipras reject the austerity imposed on Greece by the terms of its 240-billion-euro ($277-billion) international bailout.

Tsipras wants to renegotiate the bailout, which has alarmed markets amid fears it could lead to Greece leaving the eurozone.