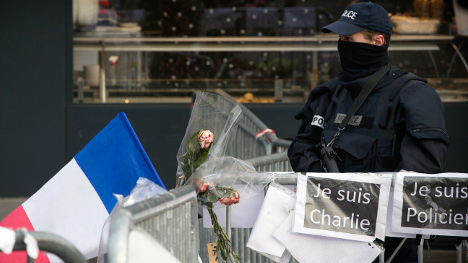 A police officer stands guard outside the kosher supermarket where four people were killed. Photo: AFP
Four men were charged and remanded in custody on Tuesday night, three of whom are suspected of having bought "equipment" for Amedy Coulibaly, who gunned down a policewoman and killed four people in a hostage drama at a Jewish supermarket two weeks ago.

The four men, aged 22, 25, 26 and 28, were among 12 people detained in police raids on Friday, a week after the jihadist attacks that left 17 people dead in and around Paris over the space of three days.

The suspects were charged with conspiracy to commit terrorist acts, and one of them for possession and transport of weapons.

Investigators discovered that three of the men had on several occasions visited  armoury stores around Paris to "buy equipment" such as knives, a taser gun, tactical vests and pepper spray.

The prosecutor noted that developments were progressing faster in the supermarket shooting than the attack on the offices of satirical magazine Charlie Hebdo, adding that investigations may continue for "months or even years".

Three of the women detained in the raids were freed on Saturday and five people were released overnight Tuesday, the Paris prosecutors' office said.

The attacks saw French officials promising to ramp up security, with Prime Minister Manuel Valls announcing plans to open special files for people linked to terrorism. He added that prisoners linked to extremist Islam could be isolated in jail, a hotbed for radicalization.

A source told the AFP news agency that €400 million will go to the police for hiring, upgrading information systems and equipment. Meanwhile, nearly 15,000 police and troops have been deployed to protect sensitive sites in the wake of the attacks.