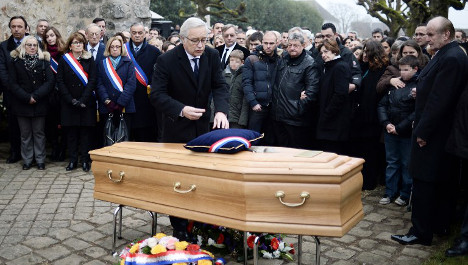 French Labour Minister Francois Rebsamen awards the Knight of the Legion of Honour to Boisseau. Photo: AFP
The tragic death of Frédéric Boisseau has been largely overlooked in the media.
Yet the 42-year-old father of two sons, Cédric and Baptiste, was the first person killed by the Kouachi brothers when they stormed into the building that housed the offices of the magazine Charlie Hebdo armed with automatic rifles.
Tragically, Boisseau's death was simply a case of "wrong time, wrong place".
Boisseau was in charge of a team of technicians who had responsibility for the heating and air conditioning in several buildings around Paris.
But on the morning of Wednesday January 7th the maintenance man happened to be in the lobby of the Charlie Hebdo building at the very moment the two gunmen came in shouting "Charlie", referring to the team of cartoonists, that they were hell bent on wiping out.
One of the Kouachi brothers then shot him dead at the scene.
His friend and colleague Jérémy Ganz, who was with Boisseau told reporters what happened:

Ganz who held Boisseau in his arms as he died said: "Frédéric was more than just a colleague, he was a friend. He was a good person, not only very human but also very lively. He was always smiling, and found the right words. We always knew we could count on him."

Boisseau, who also leaves behind his partner Catherine, was buried at a private funeral on Tuesday in Seine-et-Marne, in the outer suburbs south east of Paris.
However his brother Christophe said he felt as if Boisseau had been "forgotten" as everyone focused on the deaths of the hostages in the supermarket, the staff at the magazine and the three fallen police officers.
French Labour Minister Francois Rebsamen awarded the Knight of the Legion of honour award posthumously to Boisseau during his funeral ceremony.
Rebsamen said the victim hadn't been forgotten, adding that there "was no hierarchy when it comes to suffering or tributes".
Boisseau's funeral was attended by a flock of family, friends, and colleagues, the Le Parisien newspaper reported.
The President of the Seine-et-Marne general council, Vincent Eblé, was among those at the service.
"Catherine, Cédric, and Baptiste, our friend and your father was caught in the wrong place at the worst time," he said, adding that he was "gunned down for no real reason".
Michel Landel, the CEO of Sodexo, added that it was "intolerable that one of our colleagues could lose his life in such tragic and unfair circumstances, and for something that goes against the values we believe in."