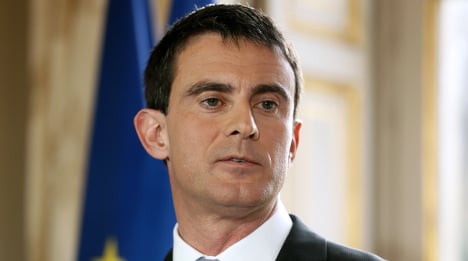 France's Prime Minister Manuel Valls. Photo: AFP
"These last few days have emphasized many of the… challenges we have to face," Valls said.
"To that we must add all the divisions, the tensions that have been brewing for too long and that we hardly mention… territorial, social, ethnic apartheid in our country."
He added that people face "social misery and discrimination on a daily basis due to having the wrong name, the wrong skin colour, or even simply for being a woman".
"We cannot look for excuses – we have to look at the reality of France in the face," he told reporters.
That reality, he said, included mass unemployment, long-term unemployment, youth unemployment, and parents' anxiety for the future of their children.
Valls added that the iconic "I am Charlie" slogan that has spread across the world isn't the only message France can share.
"France is about the freedom of expression everywhere, but also defending other values we hold dear: peace, respect for people's beliefs, and an open dialogue between religions," he said.

Valls has used the "apartheid" metaphor before when referring to the Paris riots of 2005. He said on Tuesday that the "scars are still there" from these riots, where many second-generation immigrant youths left a trail of devastation after they rampaged through the suburbs of Paris for three weeks. Almost 3,000 people were arrested.
A major study into the immigrant segregration in the suburbs of Paris was carried out in 2011. By studying two districts that were mainly populated by immigrants from north and west Africa, researchers found that many residents felt totally separated from the French.
Families regularly attended mosque, fasted during Ramadan, and boycotted school meals that were not "halal". Respected political scientist Gilles Kepel, a specialist in the Muslim world, said the results of the study were "diversified and intensified" compared to conclusions of similar research he had carried out 25 years earlier.
Since the terror attacks in Paris last week, which stretched over three days and saw 17 people killed, Parisians are braced for reprisals attacks. The government has  deployed thousands of troops to guard Jewish schools and synagogues in the fear of further attacks.
Meanwhile, there have been over 100 anti-Muslim incidents reported in Paris over the last 12 days, up 110 percent compared to the whole of January last year.
Members from both the Jewish and the Muslim communities have expressed their fear, while tourists claim the increased police presence makes the French capital feel "like a warzone".