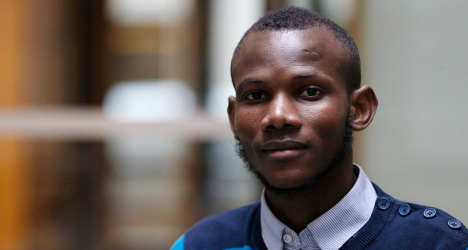 During a ceremony in his honour on Tuesday night French citizenship upon Lassana Bathily from Mali, who has been hailed as a hero for helping hostages during the attack on a Jewish supermarket.

The people who were taken hostage attended the ceremony together with their families, members of police and special forces, as well as the managers of the supermarket, according to Le Figaro newspaper.

“I am so happy to get dual nationality,” said a smiling Bathily, who also received a medal for his actions. “Long live freedom, long live solidarity, long live France.”

Bathily, who has lived in France since 2006, had applied in July last year for French nationality.

In the aftermath of the attacks almost 300,000 people signed a petition calling for authorities to grant the practicing Muslim French nationality.
Change.org, which called for support in the cause, called Bathily a "ray of light" in the "darkness and desolation".
The new French citizen reportedly shepherded terrified customers into the shop's cold room as the gunman took other people in the building hostage.
"I went to the freezer, I opened the door, and many people came in with me. I told them to calm down, not to make noise" he told BFMTV.
He then escaped the store and told police how they work in capturing the murderer, who later killed four Jewish people in the store. His actions are thought to have saved at least 15 people.
Bathily described himself as a practicing Muslim after the media lauded his courageous actions.
"I've already done my prayers in this store, in the storehouse. And yes, I helped the Jews. We are brothers, he said. This is not a question of Jews, Christians or Muslims, we are all in the same boat" he was quoted as saying.