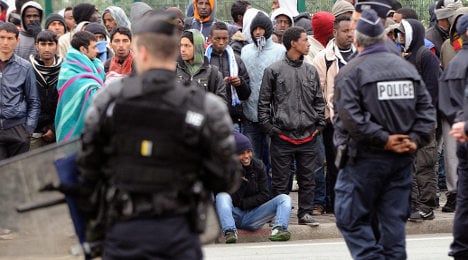 Police in Calais keep a watch over migrants. Photo: AFP

“Asylum seekers and migrants living in the poverty in the port city of Calais are victims of harassment and abuse by French police,” Human Rights Watch claim.

The report is based on the accounts of 44 migrants who say they have witnessed the abuse. However it has been criticised by France’s Interior Ministry, who have suggested it is biased.

“Nineteen people, including two children said that police had abused them at least once, including through beatings," the report says.

“Eight were left with broken limbs or other visible injuries, which according to them were caused by police in Calais and the surrounding area."

“Twenty-one, including two children, have said that the police sprayed them with tear gas,” Human Rights Watch say.

The NGO’s report includes several testimonies, including that of Rosa, aged 25, who says she was beaten after police found her in a truck.

HRW have called on the French government to launch an immediate investigation and also provide police with guidance over the use of force and when it is “unjustified and disproportionate”.

However France’s Minister of Interior Bernard Cazeneuve hit back on Tuesday and slammed the NGO for “not trying to verify the allegations of police violence to which it refers”.

“The seriousness of the charges against the public security forces contained in this document should have led the association to approach those in charge of the police with specific facts,” the minister said.

The minister asked Human Rights Watch to take their testimonies to the correct authorities so a “thorough and impartial” investigation can be carried out.