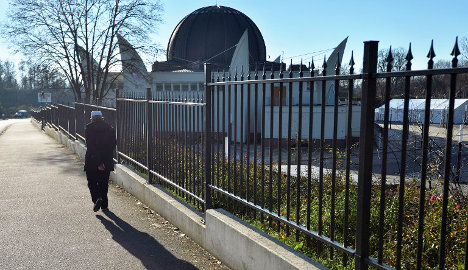 The Strasbourg Mosque in eastern France. Photo: AFP
The council, which monitors Islamophobic attacks in France, reported on Monday that the number of possible reprisal attacks on the country's Muslim community marks an increase of 110 percent compared to the entire month of January in 2014.
And that's in a period of just 12 days. The incidents include 28 attacks on places of worship  and 88 threats.
"This is unacceptable. We ask the government to move beyond making reassuring speeches and to take action to end this scourge," Abdallah Zekri, the president of the council, said in a statement.
Samy Debah, the president of the president of the Collective Against Islamophobia in France (CCIF), recently told The Local that such reprisal acts were "predictable".
"The reality of discrimination is catching up with us," he said.
"Muslims are scared. I'm scared for my mother, my sister. I live in a working class neighborhood and I would have never imagined that such things could happen."
The Muslim community has also suffered in the eyes of the international media since the attacks, with the US TV network Fox News reporting that Paris itself had eight "no-go zones" for non-Muslims. The network later apologized.
To limit the overwhelming burden on our moderators, it will not be possible to comment on this article. Feel free to join the conversation on our Facebook page.
Url copied to clipboard!