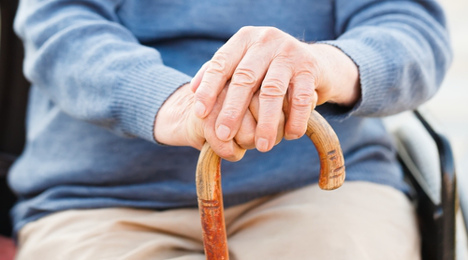 France's oldest man Philippe Vocanson has died aged 110. He says his longevity was down to a diet of cheese and chocolate. Photo:Shutterstock.
Philippe Vocanson died this weekend at his home in Saint-Etienne, in central France, at the ripe old age of 110.
In an interview long before his death the oldest man in France, known in French as "Le doyen des Français", revealed the secret of his longevity.
He never smoked, he drank very little alcohol, but had a particular penchant for cheese and chocolate.

The Frenchman was born on October 20th, 1904 – the same week that New York opened its first subway line. He worked as a shoemaker, a farmer, and was a soldier during the second world war, during which time he was captured and held as a prisoner of war by the Germans in northern France.
He had two children with his wife, who died 30 years ago, and also had six grandchildren and four great-grandchildren.
Vocanson will be buried on Thursday in at a cemetery in Saint-Etienne.
The oldest woman in France is Marie Liguinen, who is 113-years old, and lives in l'Essonne to the south of Paris.
The new title-holder of the oldest Frenchman is now Roger Gouzy, who is 109 years old. The oldest ever Frenchman was Jeanne Calment, who died in 1997 at the age of 122.
Url copied to clipboard!