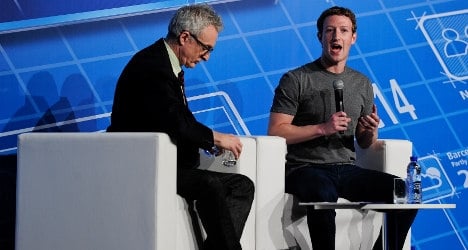 Facebook's founder Mark Zuckerberg. His company helped to create 78,000 jobs in France, according to a new report. Photo: AFP

The jobs were created in the area of software, marketing and Smartphone applications, Deloitte says.

"Around the social network, an ecosystem comprised of large and small companies, innovative start-ups, publishers, developers or media agencies continues to develop and use Facebook as a tool for business, marketing and economic development," says a Facebook statement, which commissioned the study.

Globally the company helped create 4.5 million jobs indirectly worth $227 billion with the United States the top country to benefit from the social network's activity, followed by the European Union, where 783,000 jobs were generated.

"Facebook marketing tools enable companies to reach and monetize their commercial targets in a much better way, said Laurent Solly, managing director for Facebook France, in an interview to the Figaro. "We help them to develop their revenue and to hire."

But if the Silicon Valley giant seems to be boosting the French economy, some say the study is misleading and is simply a marketing strategy of Facebook as a way of improving the social network's reputation, which has been tarnished by scandals over the amount of corporation tax it pays.

It would not be the first time that this 'technique' has been used. Google and Apple have released reports that look at how many jobs they indirectly create but some experts have claimed say their figures are way wide of the mark.

In 2013, Economist Enrico Moretti from the University of California published a book explaining how the number of jobs created indirectly by Apple in 2012 was in fact a third of the total announced by the computing company.