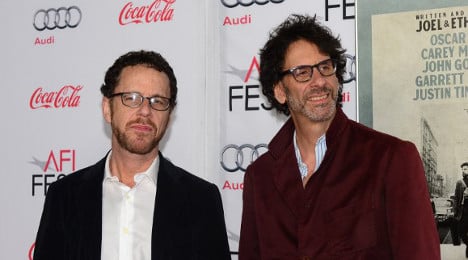 Joel and Ethan Coen will be co-presidents of the panel of filmmakers and actors who will judge the 20-or-so films in the main competition event of the festival, which will run May 13-24, according to a statement.

"We are very happy to be coming back to Cannes," the brothers were quoted as saying in the organisers' statement, which was in French.

The two directors added they were "especially happy at the opportunity being given to us to see films from around the entire world". They stressed that Cannes "has always played an important role for us", since the beginning of their careers.

It is the first time the Cannes jury will be jointly headed by two people.

But the Coens are used to collaborating closely, having shared directing and writing duties on all of their films over the past three decades.

The siblings are also Cannes darlings, having presented seven of their 16 features at the French Riviera showcase event.

The wry humour of their screenplays, their demanding production standards, and the outstanding cinematography they bring to bear on their movies have won a slew of awards in other competitions — most notably the Oscars, where their "No Country for Old Men" cleaned up in several categories including Best Picture in 2007.

"The Coens incarnate a certain 'auteur' filmmaking that is universal and with wide appeal, full of humour and totally original in their way of looking at the world," the director of the Cannes Film Festival, Thierry Fremaux, told AFP.

Joel, 60, and Ethan, 57, take over running the Cannes jury from last year's president Jane Campion, the New Zealand director of "The Piano".

The other members of the jury have not been announced yet, but Cannes's organisers like to bring in filmmakers and actors of note from different regions around the world.

The Cannes Film Festival's official selection of movies competing for the Palme d'Or top prize is also usually an eclectic list ranging across themes and borders. The line-up is usually announced the month before the festival opens.

If the Coen brothers' filmography is anything to by, though, dark humour and offbeat characters or situations would be appealing traits they would be looking for.

They have also increasingly been attracting Hollywood stars to their own films.

George Clooney, for instance, has already appeared in three of their movies — "O Brother, Where Art Thou?", "Intolerable Cruelty" and "Burn After Reading".

He is appearing in a fourth Coen brothers film due to come out next year, "Hail, Caesar!", with Josh Brolin, Tilda Swinton, Channing Tatum and Scarlett Johansson.