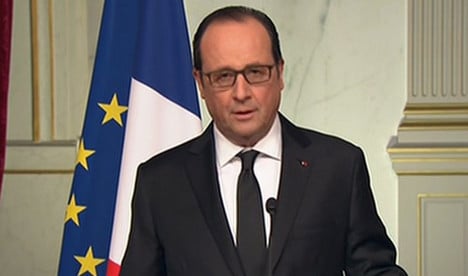 Hollande speaks to the nation in the aftermath of the Paris attacks. Photo: AFP

Hollande's ratings leapt by a record 21 percentage points to 40 percent, according to an opinion poll carried out by the Ifop polling company.

The attacks by three Islamists in and around Paris nearly two weeks ago left 17 people dead, shocked the country and sparked an outpouring of international support.

Prior to the attacks, Hollande's ratings had fallen to historic lows in the face of record French unemployment and sluggish growth.

"He needed to capture the unity of the nation and I think he did it,” historian Alain Bergounioux argued.

Polls published a week after the attacks said 79 percent of the French public would salute the way Hollande has handled the crisis.

But how long will this sudden spike in popularity last and does it give Hollande hope that he could pull off an upset in the 2017 presidential elections.

"The memory will linger but unemployment, deficits and taxes will come back to the fore," Jerome Fourquet, from polling company Ifop told AFP.