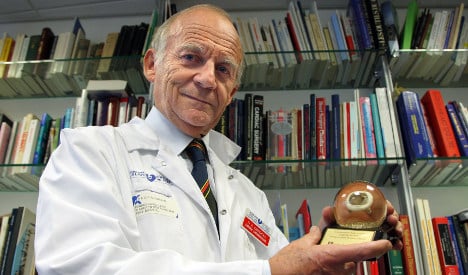 Cardiac surgeon Alain Carpentier. Photo: AFP
The patient, 68, received the artificial heart from French biotechnology company Carmat back in August last year and has been recently discharged from hospital.
He was the second person to get the new treatment – the first was a man in his late seventies who died in Paris just three months after the transplant.
But doctors said on Monday that the second patient, who has remained anonymous, shows no signs of stopping five months after the operation.
"This patient is a miracle," Alain Carpentier, the co-founder of Carmat who developed the heart, told the Le Parisien newspaper.
"He told us that he had been out for lunch 70 kilometres from his home in Nantes – all without assistance. If that's not a sign of a normal life then I don't know what is."
The man, who was previously in the advanced stages of heart failure, is even said to have been using an exercise bike. His heart is battery powered and made from a mix of synthetic and organic materials.
Carpentier, a cardiac surgeon, has spent 25 years working on the development of the artificial heart. His company says that around 100,000 people in Europe and the United States are in need of a heart transplant.
While artificial hearts have been long available, they are normally used to fill gaps until another heart is available for transplants. The hearts from Carmat are now showing that artificial hearts may be a permanent solution.
Url copied to clipboard!