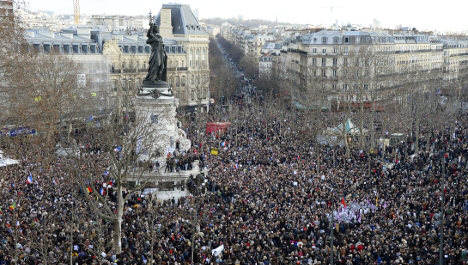 Millions march for unity in France, but it might not last too long. Photo: AFP

There was more evidence on Monday that the feeling of solidarity and unity that brought millions out on the street in the wake of the terror attacks was beginning to fade.

From lorry drivers going on strike and politicians lining up against each other once again, to incidents in schools and more reports of anti-Muslim attacks, it was becoming clear that France was moving on after the three days of terror that left 17 dead.

In one of the more high profile incidents on Monday it was reported that a French flag flying over a primary school on the island of Corsica had been burned and replaced by a Moroccan one.

An investigation is underway to find those responsible for an act that is punishable by a fine of up to €7,500 and six months in prison.

The national observatory against Islamophobia also released worrying new figures on Monday that there have been 116 anti-Muslim acts recorded since the Kouachi brothers opened fire at the offices of Charlie Hebdo.

That reflects a 110 percent rise on the same period in January 2014.

“This situation is unacceptable and we demand that authorities take measures, above just giving reassurance, to put an end to this plague,” said the president of the observatory Abdallah Zekri.

Muslims have also criticized the government for what they see as double standards for placing soldiers outside synagogues but not in front of mosques, even though some have been targeted.

French opposition politicians, who have steered clear of criticizing the government for fear they would come under fire themselves, have once again shown signs of reverting to their usual roles.

Former minister and UMP deputy Bruno Le Maire told France 3 on Sunday that he doesn’t want the “national unity to mean the current government gets a blank cheque”.

And in a sign Sarkozy is itching to get back in the ring with his old foe Hollande, he said this weekend that national unity will only continue as long as “debate is not inhibited”.

The fissures have been picked up by the French press.

In the newspaper Midi Libre Jean-Michel Servant writes: “It had to happen sooner or later. Twelve days after the attack against Charlie Hebdo and the call for national unity, political life returns to normal.”

Several newspapers also point to the fact that truck drivers protested on Monday morning, causing traffic chaos and disruption for motorists across France, as a sign that things were returning to normal in the country.

But perhaps the clearest cracks in the feeling of togetherness can be seen in French schools.

According to the Journal du Dimanche there has been around 200 incidents reported since the terror attacks.

Most of those are believed to be linked to pupils refusing to respect the minute’s silence in the day after the Charlie Hebdo massacre.

And on January 14th there were reports of fights between pupils from rival schools in the town of Senlis to the north of Paris, with one group of pupils goading another by shouting support for the killers of the Charlie Hebdo editorial team.

Education Minister Najat Valalud-Belkacem is putting together a raft of measures aimed at reinforcing the Republican and secular values in schools.

The French themselves seem to accept that things won’t always feel this united with 78 percent of respondents to a recent poll agreeing with the statement that the sentiment of unity was a temporary movement, linked only to the attacks and would only last a few days.