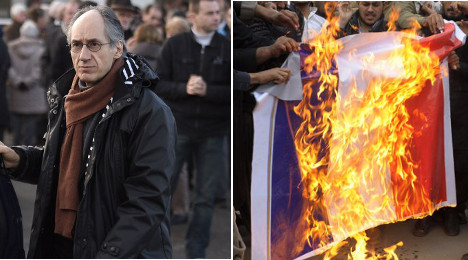 Gérard Biard of the Charlie Hebdo magazine, and a French flag being torched in Pakistan. Photos: AFP
Charlie Hebdo's decision to put a cartoon image of Muhammad on its front page continues to make headlines across the world on Monday, almost two weeks after the French satirical magazine was attacked by Islamic extremists and 12 people were killed .
After violent demonstrations in Niger at the weekend, there were more protests against the magazine on Monday in Afghanistan, where there were reports of French flags being burned and several hundred thousand people joined a state-organised protest in Chechnya.
There was also a small protest in Gaza with Islamists reportedly chanting that the French should "get out of Gaza or we will slaughter you". A French flag was also burned.
The protests come as more Muslim bodies have denounced the magazine for depicting Muhammad in tears holding a sign which reads "I am Charlie", on the cover of its survivors edition which has been printed five million times to meet demand in France and abroad.
The Organisation of Islamic Cooperation, a pan-Islamic human rights body, urged Muslims on Sunday to show restraint in the face of the magazine's "hatred", claiming that the magazine "ridiculed the most revered personality" of Islam.
And on Monday the Council of Arab Ambassadors in Paris slammed the "outrageous cartoon".
In Iran, more than 2,000 Iranians protested outside the French embassy in Tehran, chanting "Death to France" and urging the ambassador be expelled.
But despite the uproar outside France, the bosses of the magazine have stood their ground this week with the editor-in-chief Gérard Biard speaking out in defence of the cartoons.
"We do not attack religion, but we do when it gets involved in politics," Gérard Biard told the NBC.
"If God becomes entangled in politics, then democracy is in danger."
He added that some staff members at the magazine are religious, but choose not to be offended.
"To be a believer is a personal choice that concerns no one else," Biard said. "We respect that, in the same way that we respect a person's private life as long as the individual does not bring his or her private life into the public sphere."
While the "sold-out" signs at kiosks across the country suggested the French overwhelmingly back the magazine's decision a weekend poll suggested that might not be the case.
Forty-two percent of those surveyed said publishers shouldn't release Muhammad cartoons if they can be considered offensive to Muslims. Demand has been high for the latest edition of Charlie Hebdo. Photo: Maurizio Gambarini/AFP
A debate is still raging on whether Charlie Hebdo took the right decision to once again depict Muhammad, with some arguing that it will only increase tension and division, which is exactly what those who carried out the attacks desire.
Belgian cartoonist Philippe Geluck is one of those who has reservations about the publication.
“Freedom of expression, which here is absolute, does not however, mean we don’t have a certain responsibility,” he said.

Geluck said he is convinced that no cartoonist has the intention of hurting “sincere and democratic” Muslims, “but they do and I think there’s a real need for reflection”.

Asked about the front page of Muhammad, Geluck said it was “dangerous, but that he understood it”.

While most French media outlets have republished Charlie Hebdo's cartoon, their counterparts in the English-speaking world have, for the most part, decided not to – a stance that has led to criticism from the French media.
France 24 rounded up a list of how the world's English-language media handled the images, singling out US network CNN, The New York Times, and UK newspaper The Telegraph. These networks have either refrained from re-publishing the images at all, or have cropped out or blurred the offending cartoons.
A clip from Sky News went viral over the weekend after former Charlie Hebdo editor Caroline Fourest tried to show the camera a copy of the magazine during a live interview (see below).
"I'm very sad that journalists in the UK do not support us, that journalists in the UK betray what journalism is about," she said.
She added that it was "completely crazy" that the network didn't give viewers the opportunity to decide if the cartoon was offensive or not. As she held up a copy of Charlie Hebdo, the camera panned away and viewers were sent back to the studio as the host apologized.
Other papers, such as The Guardian, the BBC and the Wall Street Journal have published the latest front cover off the magazine often with clear warnings that the article's contain images that may be considered offensive.
The Local's longstanding policy has always been not to republish the cartoons of Muhammad
That's a decision which Charlie Hebdo's Biard does not agree with.
"I'm quite critical of newspapers in democratic countries," he told NBC. "This cartoon isn't just a little cartoon – a little Muhammad. This is a symbol. It's the symbol of the freedom of speech, thought, democracy, and secularism.
"This symbol is what they refused to publish. This is what they must understand when they refuse to publish this cartoon, when they blur it, when they decline to publish it they blur out democracy, secularism, freedom of thought, and they insult the citizenship."