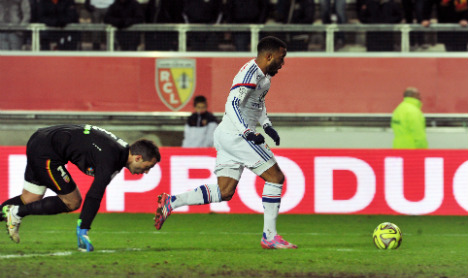 This latest victory left Lyon four points clear of Marseille at the top with Saint-Etienne and Paris Saint-Germain two and three points further back respectively.

All three play on Sunday against Guingamp, Rennes and Evian respectively.

Lyon have now won 11 of their last 13 league games and Lacazette has been the steel-tipped spearhead of that charge. He is on track to eclipse the goals scored by Zlatan Ibrahimovic, top scorer in the last two Ligue 1 seasons with 30 and 26 goals.

The record is held by the Yugoslav Josip Skoblar who scored 44 for Marseille in 1970-1971.

Lyon always fancied the win against a promoted side languishing second from bottom.

So it was no surprise when Lens' 19-year-old central defender Jean-Philippe Gbamin scored an own goal with an astonishing back heel that left his goalkeeper Rudy Riou no chance after 22 minutes.

Nor was it any great surprise when Lacazette stepped up to send Riou the wrong way from the penalty spot on 26 minutes after provoking a defender into a handball with his tricky movement inside the box.

Lyon president Jean Michel Aulas described the 23-year-old Lacazette as better than Real Madrid's Welshman Gareth Bale, and claimed he would not sell the centre-forward even if Real dug deep for another €100 million.

Lyon handler Hubert Fournier said after the game being top of the league was like being on a bike: "You can't look behind you or you fall off. I'll tell the players and keep reminding them to just look ahead. When we get to May we'll see if we've had the guts and the ambitions we're aiming for."

His counterpart Antoine Kombouare felt his charges had given it away saying: "Christmas is over. We've got to stop giving people presents like that."

Dimitar Berbatov may not be so fast on his feet these days but the Bulgarian veteran's defence splitting pass led to Bernardo Silva's goal that gave Monaco a 1-0 win over Nantes, who hit the crossbar deep into injury time.

Caen are still rock bottom but the Normandy minnows got a morale boosting fourth win of the season with an unexpected 4-1 victory at home to Reims.

There was a hat-trick for Montpellier's Argentine striker Lucas Barrios in a see-saw 3-2 away win over Metz, while Bastia, who beat PSG 4-2 last week, drew 1-1 at Toulouse as they continue to edge away from the relegation zone.

PSG welcome back strikers Ezequiel Lavezzi and Edinson Cavani for their home tie with Evian after the pair were punished for coming home late from their Christmas holidays.

They have both been left out of PSG's last three games.

PSG last won a league match on December 6 and coach Laurent Blanc, who seems to be under pressure even when his side is winning, has been widely criticised in the press this week.

Marseille lost the league lead last week after months on top of the heap when going down 2-1 at Montpellier, but will look to bounce back against Guingamp, their cup conquerors the week before, at the Stade Velodrome on Sunday.

On Friday, Nice eased their relegation concerns with a shock 2-1 win at high-flying Bordeaux.

The hosts, who could have moved up a place to fifth with victory, made light of their missing Africans on Cup of Nations duty when Diego Rolan opened the scoring from the penalty spot on 33 minutes, after goalkeeper Mouez Hassan was adjudged to have brought down Nicolas Maurice-Belay in the box.