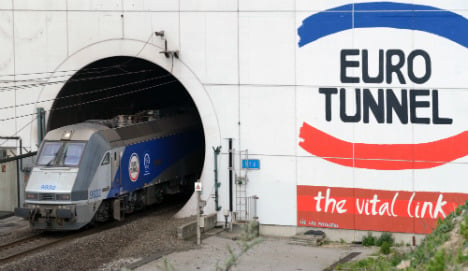 "Our passenger service is currently operating to schedule with up to one departure per hour," the firm said on its website.

Services resumed from Britain at 2:45 am local time and from France at 4.30am, it said on Twitter.

Eurostar, which offers passenger rail services between London, Brussels and Paris, said schedules would return to normal on Sunday.

The fire Saturday forced all Eurostar trains already en route to turn back to their stations of origin, while 42 people were evacuated from the truck shuttle using the service tunnel.

Police in southern England have said the fire was "at the French end of the tunnel and is being dealt with by the French authorities."

"There are no reported injuries," police added.

The fire sparked travel chaos in Britain and France with long queues for refunds reported at London's St. Pancras station.

In November 2012, a fire on a freight train halted traffic in the tunnel for two hours.

Four years earlier, a lorry fire caused major damage in the tunnel, affecting 650 metres of the structure and gumming up traffic for 30 hours.

Some 400 trains and 1.5 million lorries pass through the tunnel every day.