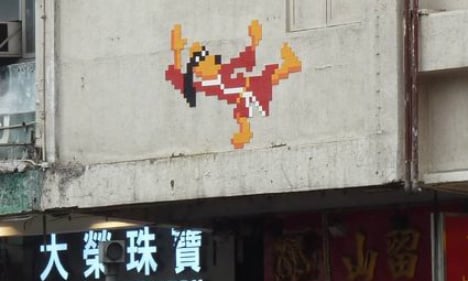 It comes as experts say the demand for "cutting edge" art is growing across the Asian market with new, younger collectors emerging.

The ceramic mosaic of 1970s American cartoon character Hong Kong Phooey — a mask-wearing dog who is an expert in kung fu — was created by high-profile French street artist Invader.

It first went up on a wall in a quiet street of Hong Kong's upmarket Happy Valley neighbourhood last January.

But the artwork, which measures 1.3 metres x 2.1 metres was taken down within weeks by Hong Kong authorities, sparking outrage from residents.

Now the French artist has recreated the mosaic — which has the character performing his signature flying kick — and it is slated to be the highlight of Tuesday's auction.

It will be sold alongside the first ever work to be auctioned in Hong Kong by British artist Tracey Emin — a turquoise neon sign that reads "Trust Me", expected to fetch up to HK$350,000.

Artists such as Invader are responding to this challenge by making replicas of their works so collectors can take them home, she said.

"We're reaching out to new collectors here, people in their 30s or 40s who are very international."

Hong Kong has emerged as one of the world's major auction hubs in art and wine thanks to cash-rich mainland Chinese buyers with an appetite for luxury items.

The government is also developing a new art and culture district on the Kowloon waterfront where contemporary art museum "M+" is expected to boast a world-class collection.

But the city authorities are also frequently criticised for failing to preserve Hong Kong's cultural heritage, with the rapid pace of development leading to the demolition of historic buildings, and iconic graffiti scrubbed from walls.

Invader expressed deep disappointment after his art was taken down.

"I have never faced a situation where a public authority would systematically and rapidly remove the art from the streets," the artist said in a statement published by the South China Morning Post in February of last year.

"What message would you send to your citizens? What modern cultural heritage do you want to leave them?"